RadarScope Through the Years

RadarScope’s origins date back to the early 90s, when the Oklahoma Mesonet and it’s OK-FIRST program were just getting started. Working to improve the tools and decision-making capabilities of local emergency managers, software developers at the Oklahoma Climatological Survey created one of the first software packages to display native NEXRAD Level III radar data on Macintosh and Windows PCs.

When Apple announced the iPhone in 2007, it appeared to be the first handheld device capable of displaying native radar data. Unfortunately, there was no way to develop custom apps for it. That changed in 2008, with the first iPhone SDK. Software engineer Justin Greenfield started working with the development kit as soon as it was released. He had a prototype up and running by early March. In May, Justin, Mike Wolfinbarger, and Stdrovia Blackburn approached OU’s Office of Technology Development to discuss how make the app available to the broadest audience. That led to the founding of Base Velocity, LLC in July. On August 30, RadarScope became the 16th paid weather app on the App Store. Over 200 people paid the $9.99 on the first day 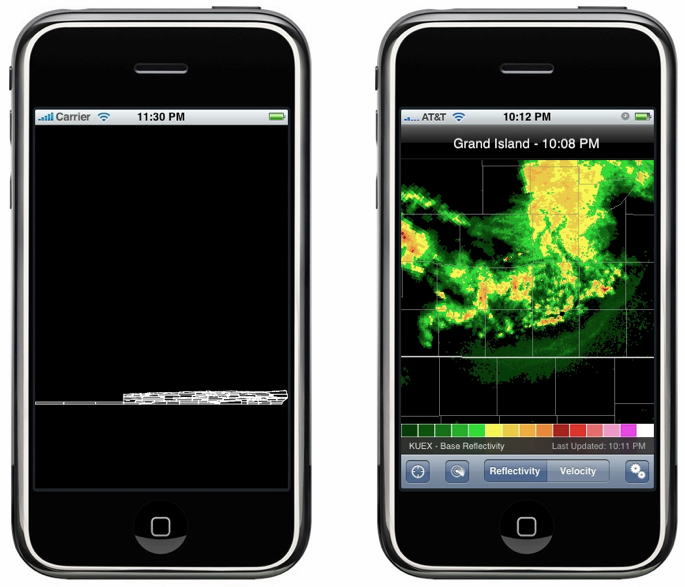 RadarScope 1.0 was a hit, but it displayed only 4-bit reflectivity and velocity at a single tilt, and the image couldn’t be animated. At the same time, the mobile device market was experiencing rapid growth and change. Over the next three years, regular updates were released to support new devices and to add animation, multiple tilts, and the rest of the Level III product suite. The release of the iPad in early 2010 kicked off renewed interest in tablet computers. RadarScope added native support for the iPad in a free update that March. 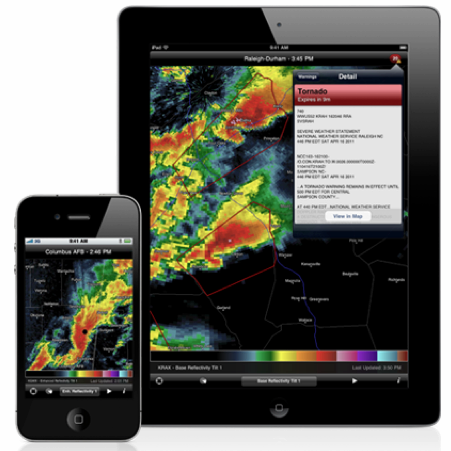 RadarScope for iPad debuted in March 2010. Support for new 8-bit enhanced reflectivity and velocity products soon followed along with warning polygons, the feature most requested by customers.

With success came new opportunities, it was difficult for the development team to keep up while working part-time. Robb Young joined the team in 2010 and helped develop RadarScope for Mac. The team added support for the new suite of dual-polarization products, including differential reflectivity, correlation coefficient, and hydrometeor classification. Hiring Young also enabled the team to tackle one of the biggest customer requests to date, culminating in the release of RadarScope 1.0 for Android.

An expanded product line, a growing customer base, and the desire to move beyond data sourced from the NWS prompted additional changes. RadarScope needed a full-time development team, 24/7 support, a robust server infrastructure, and a broader suite of data. Discussions ensued with WDT founders Mike Eilts and JT Johnson, leading to an acquisition of RadarScope and the entire development team joining WDT. 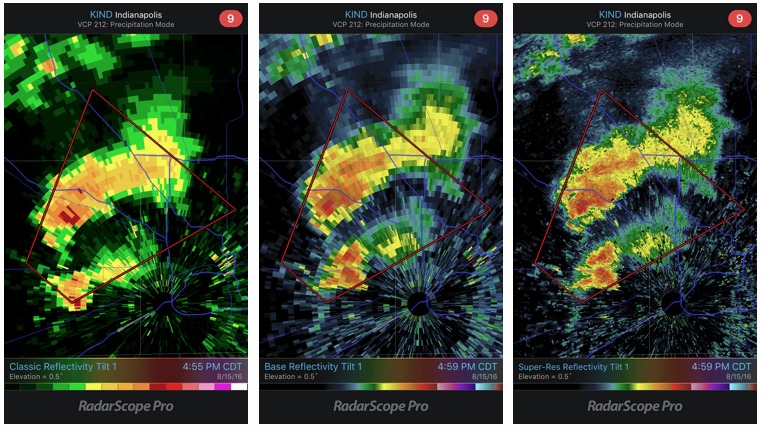 RadarScope 1.0 displayed the best resolution that Level III had to offer. When better products became available in 2010, RadarScope supported them. Two years later, RadarScope pushed the envelope as the only app to offer Level II super-resolution in the form of custom WDT-generated products.

WDT provided a home in which the core development team could focus on the app itself, relying on WDT’s support team to assist customers 24 hours a day and leveraging the expert capabilities of WDT software developers and meteorologists to push the envelope. The RadarScope team expanded to include Himanshu Shrivastava, Ross Kimes, and later Scott Werkema. Over time, they added new interactive capabilities, including a suite of tools for drawing on the map, measuring distance, inspecting data values and sharing video and animated GIFs. The app was also enhanced to include radar data from Canada and eventually Korea.

What started as a simple app had evolved into an important service for meteorologists, first responders, weather enthusiasts, and the general public. RadarScope required a recurring revenue stream to fund future services and enhancements. In 2014, WDT introduced RadarScope Pro, a $9.99 per year subscription package that included up to 20 frames of animation for super-res products and displayed near-real-time lightning data. 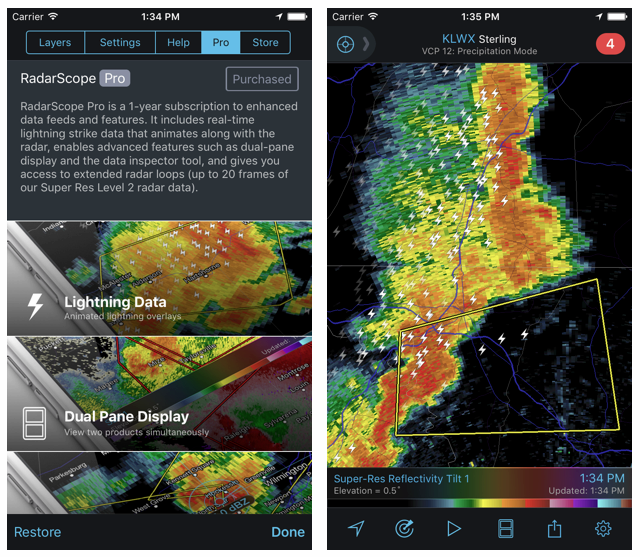 RadarScope has seen great success since its launch eight years ago, and 2016 is no exception. At the beginning of the year, the development team was honored to receive a Special Award from the American Meteorological Society “for tireless efforts to develop and improve their RadarScope mobile application, enabling widespread access to professional quality weather radar information by meteorologists and the public.”

This past March, WDT released RadarScope 3.0, featuring a newly redesigned user interface. The new UI affords the addition of dual-pane mode for Pro subscribers. It allows two products from the same radar to be viewed side-by-side while zooming and panning in tandem; and it’s designed for the addition of new features we’ve yet to release. 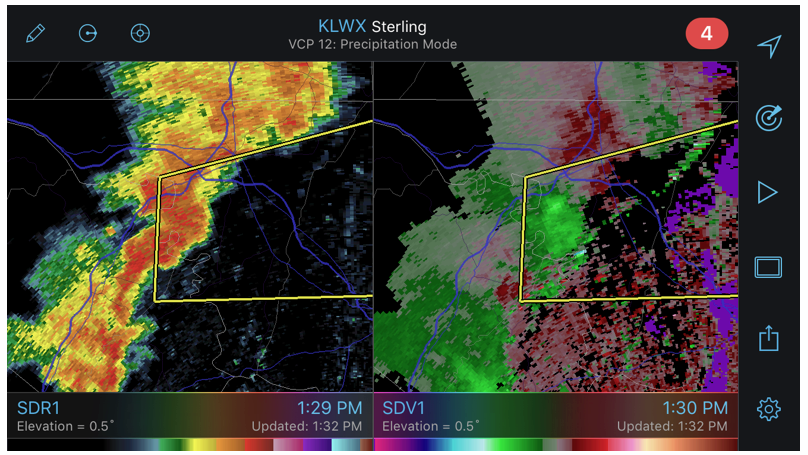 Looking ahead, WDT is hard at work on the next round of enhancements. Version 3.0 for Mac is in development and will include dual-pane capability. We’re exploring tighter integration of RadarScope with our award-winning Weather Radio alerting app. And we have a wish list that stretches far into the future. You may even find a hint or two in the screen shots accompanying this article, but for now that is confidential.

PREVIOUS POSTWhat Does Differential Reflectivity and Correlation Coefficient Tell Us
NEXT POSTRadarScope Users Group: Image of the Month