Each year, extreme and interesting weather conditions across the U.S. appear on radars and, therefore, RadarScope. Over the last few weeks, we asked our DTN meteorologists to pick their favorite radar images of the year. With more than 30 radar products and four different radar tilts across 155 Doppler Radars, more than 10,000 potential images are created every few minutes. We selected fifteen out of the millions of images created and presented them to the meteorologists for voting purposes. We guarantee we probably missed something cool, but here is what the DTN team selected for 2019. 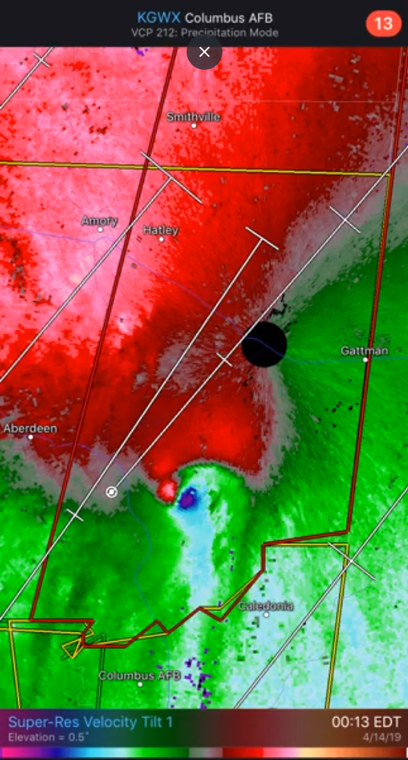 April 14, 2019: An EF-2 tornado passed through eastern Mississippi near or over the Columbus AFB radar site. With the storm coming so close to the radar site, the tornado was quite evident. The tight couplet of inbound and outbound winds was measured at 400-500 feet above the ground, giving meteorologists a near ground truth that a tornado was in progress.

#4: Hurricane Dorian off the Carolina Coast 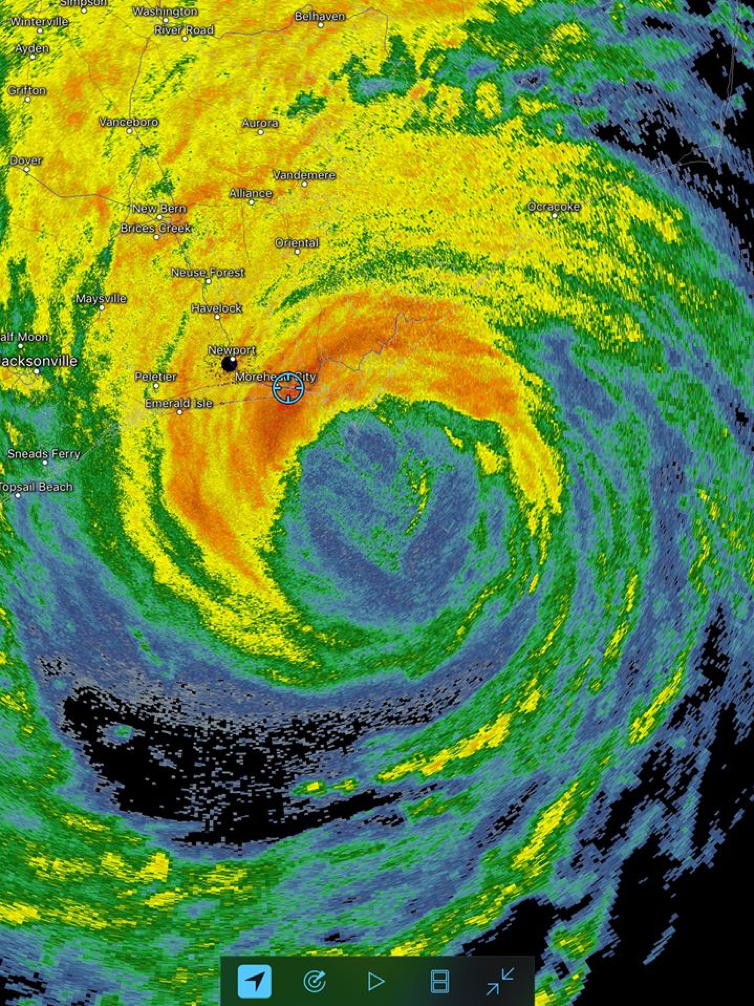 September 4, 2019: Hurricane Dorian, which was the 2nd strongest Atlantic hurricane on record, approached the North Carolina Coast. The outer eyewall battered the Morehead City area and was quite evident in this image. 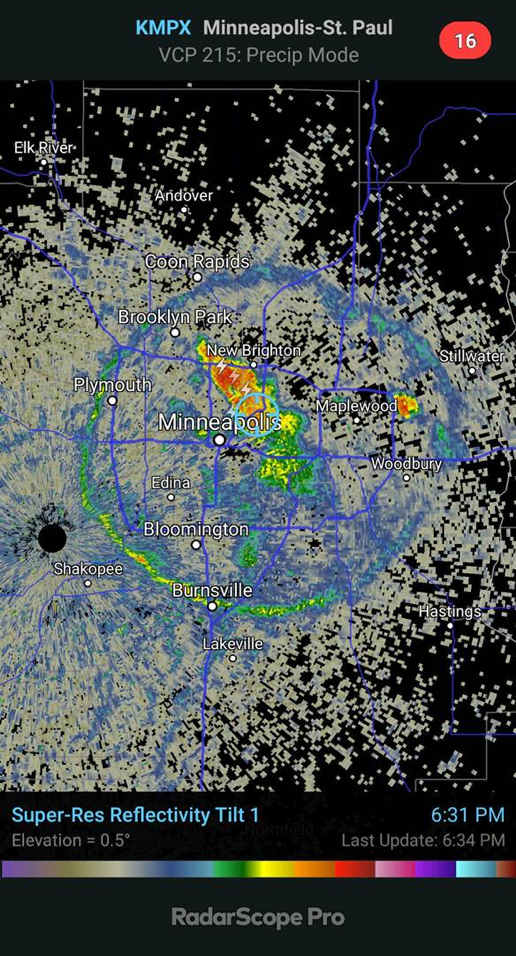 August 3, 2019: On a relatively calm day, a thunderstorm developed seemingly out of nowhere right over downtown Minneapolis. Its initiation was potentially aided by the urban heat island as temperatures were a few degrees warmer in the City than in outlying areas, which allowed the environment to reach its convection temperature. As the thunderstorm weakened, rain-cooled air was displaced outward from the center sending a wave in all directions, much like dropping a pebble in a pond. The radar was able to pick up this wave as it gathered dust, bugs, and other small nuclei. 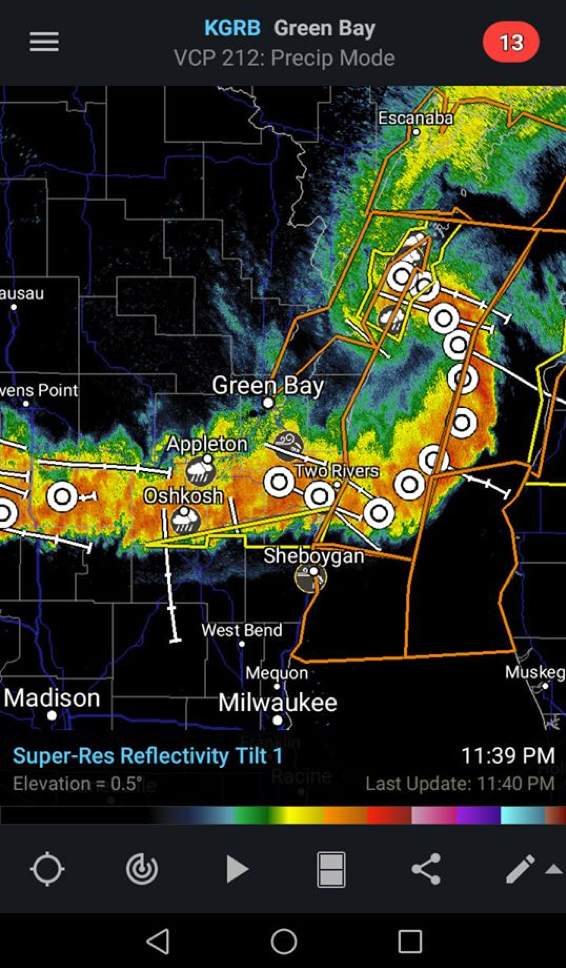 July 19, 2019: Thunderstorms organized in northern Wisconsin and marched east through the evening and overnight hours, eventually classified as a derecho. We wrote about the event in a RadarScope blog back in July. Notice the comma shaped segment east of Green Bay, a sign of damaging winds as the storm “bows-out” during its lifecycle.

May 17, 2019: A classic supercell-shaped thunderstorm appeared on the Dodge City radar. While the official storm survey came in at a high EF-2, the hook echo and gate-to-gate velocity signature caught they eyes of DTN meteorologists, with 65% of the first place votes going to this scan. 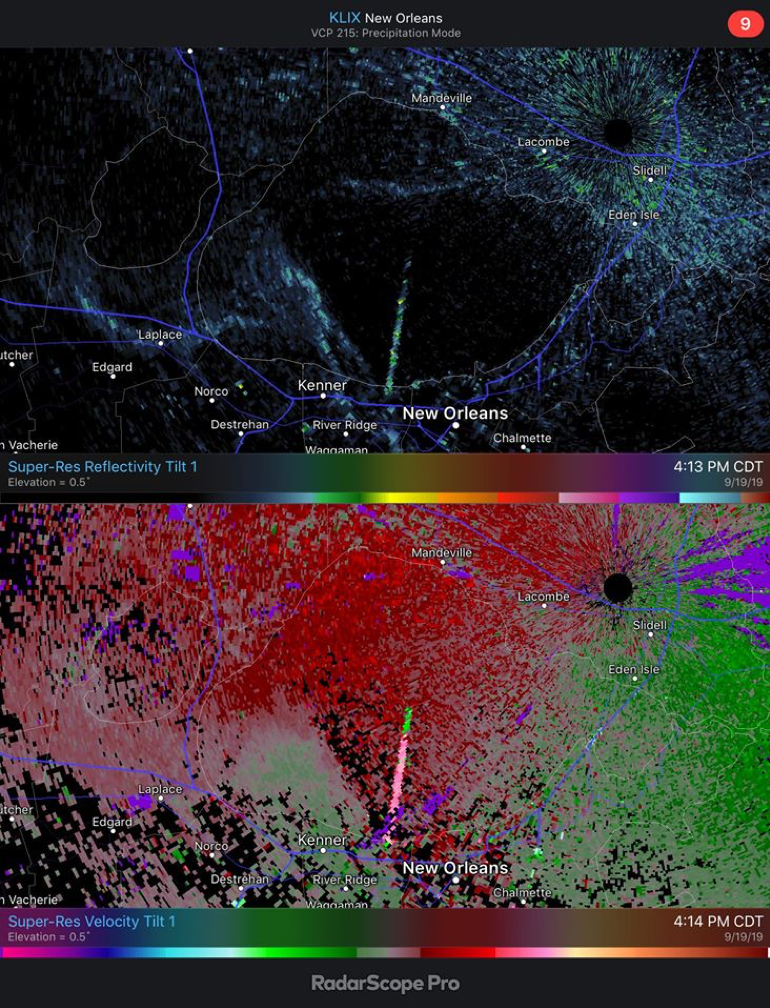 September 19, 2019: Sometimes the radar can show non-meteorological images as well. While this image from New Orleans did not crack the top five, it was worth an honorable mention. Radar beams can bend as they move outward from the radar site, due to changes in atmospheric density. On September 19, traffic along the Lake Pontchartrain Causeway was scanned by the radar beam due to this phenomena.