We’re pleased to announce the release of RadarScope for Apple TV. We redesigned the app to create an experience that feels at home on tvOS and leverages the platform’s unique UI. It’s available in the App Store today for $9.99, but it’s free for anyone who has already purchased the iOS version. 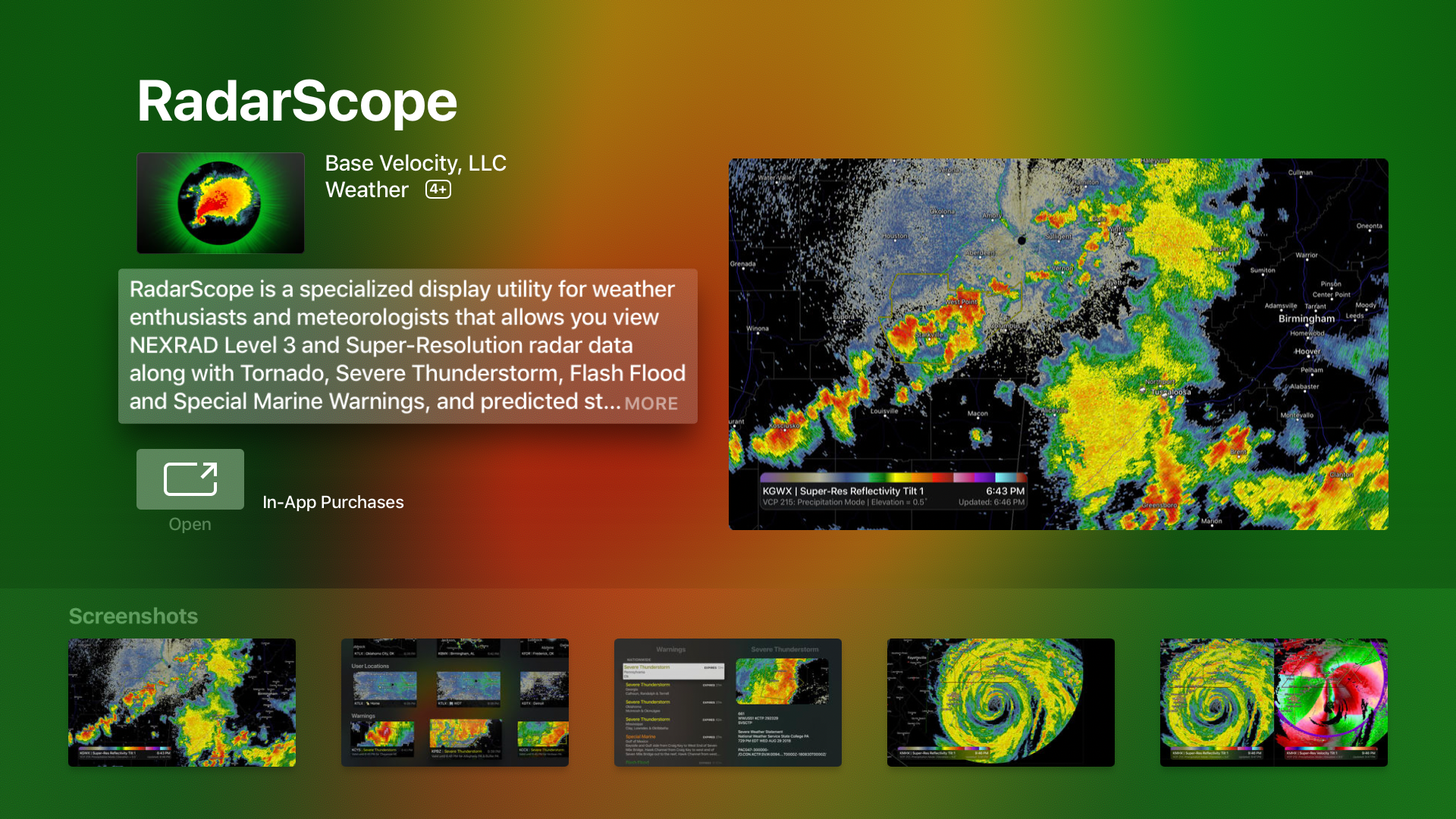 Remote Control
We set out to create an app that is definitively RadarScope while leveraging the unique capabilities of Apple TV. You’ll find the majority of RadarScope’s features are there, including the interactive map, the full suite of radar products, and optional data feeds via RadarScope Pro, AllisonHouse, Spotter Network, and other sources.

Opening RadarScope on Apple TV takes you to the landing page, which includes badged buttons for any layers you’ve enabled, such as locations and warnings. It also includes a menu for quickly navigating to the app’s settings. RadarScope Pro subscribers will see preview tiles for their favorite radars, locations, and active warnings. Click on any of those or the current radar/product preview at the top of the screen to view the map. 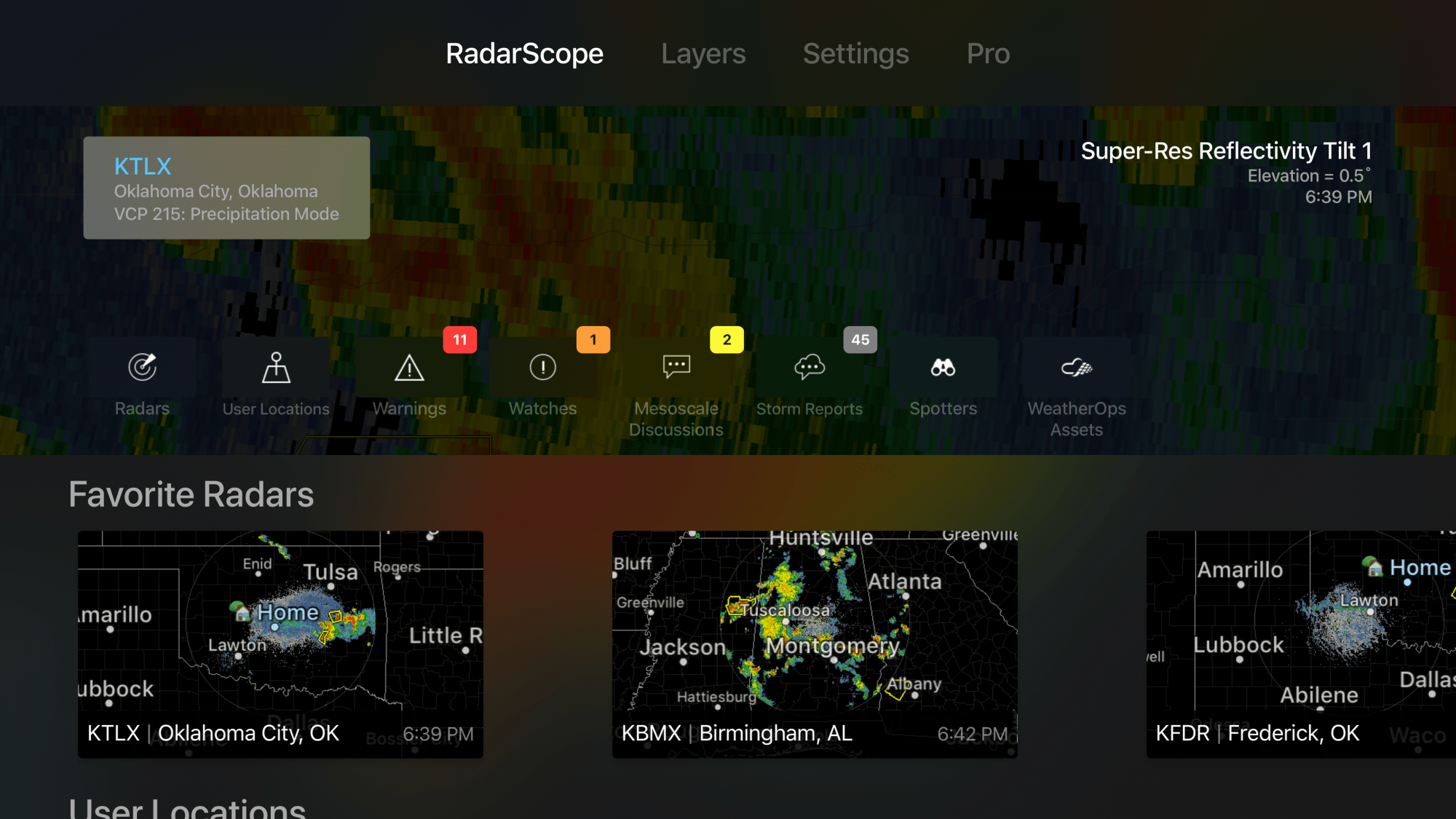 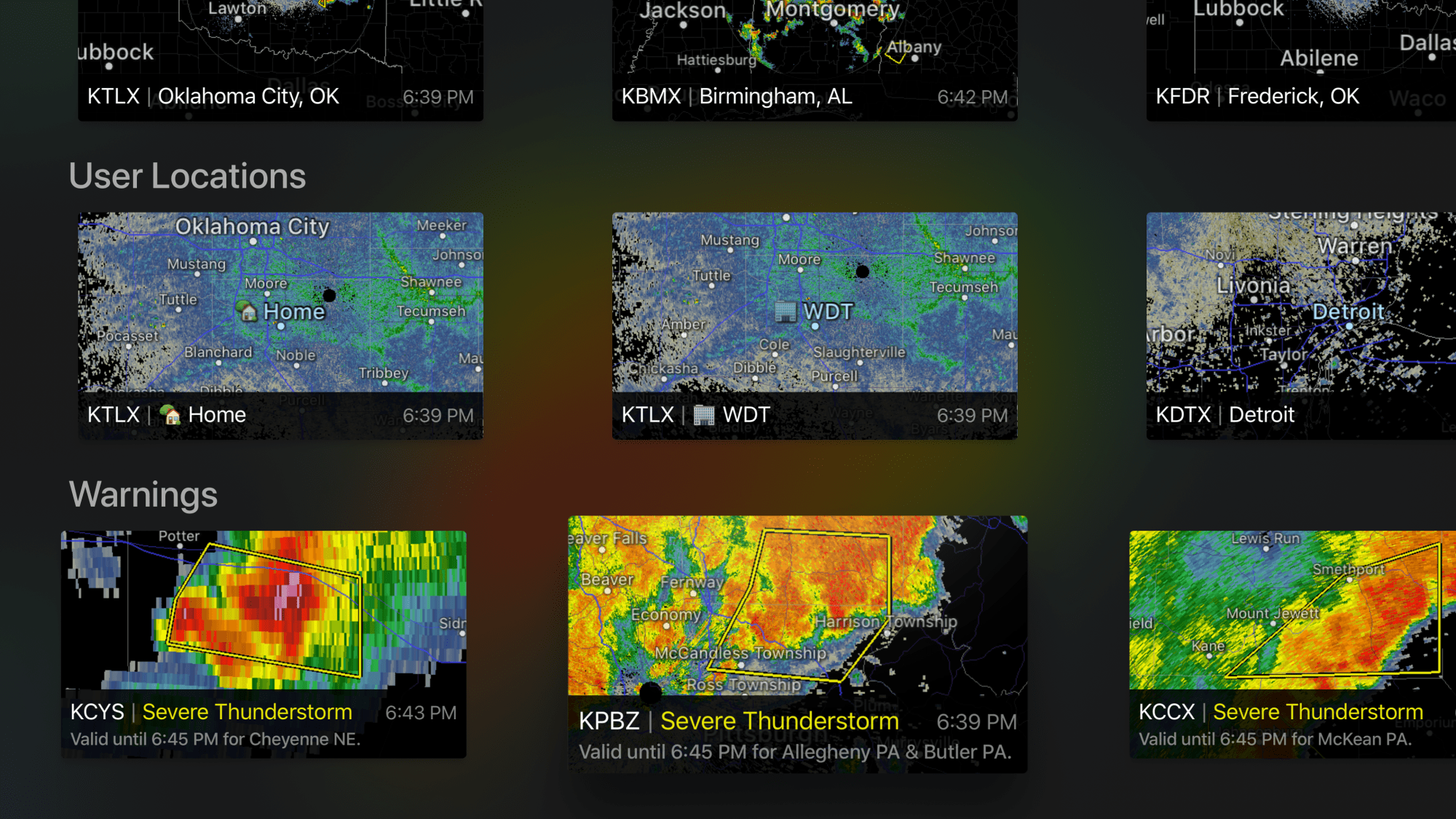 The map is entirely controlled via the Siri Remote. Use the touch surface to scroll around the map. Click once to zoom out. Double-click to zoom in. Click and hold to reveal settings for selecting the nearest radar, changing radar products, and toggling the visibility of other layers. Click the remote’s play button to start or stop the loop. Click the menu button to return to the landing page, where you can access the full array of settings. 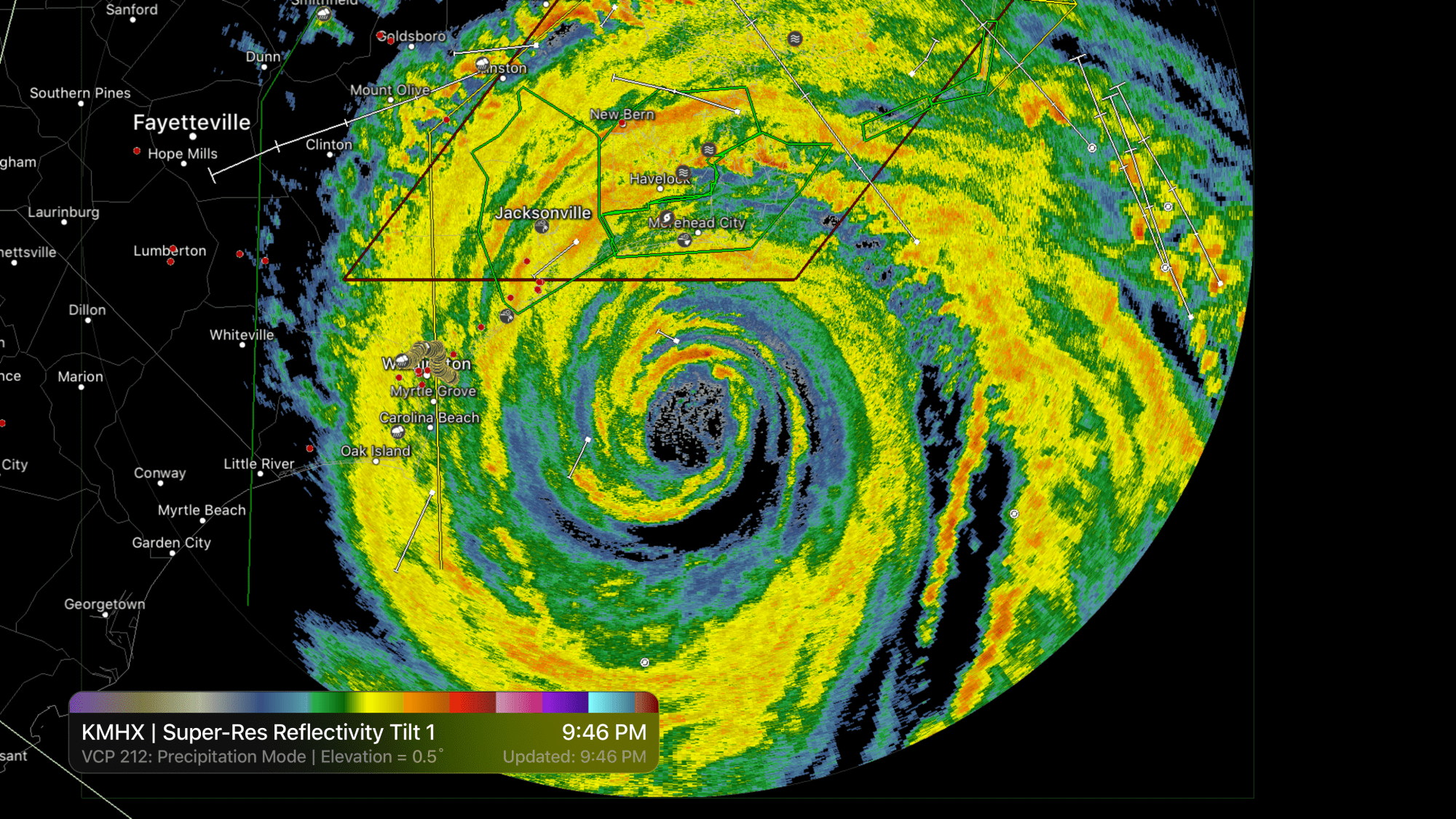 Pro Features
The optional RadarScope Pro subscription unlocks the app’s full potential on Apple TV. For Pro subscribers, the landing page includes preview tiles for all of your selected radars, your custom locations, and active warnings. These resemble the content preview tiles in other apps, so you can choose a specific radar, location, or warning as quickly as you navigate your TV show and movie catalog. They’re a great way to immediately see what’s happening in the places you care about most and wherever severe weather is underway. As on other platforms, RadarScope Pro Tier One includes lightning data, longer radar loops, and multi-pane display (dual or quad on Apple TV). Tier Two adds a 30-day archive for radar data, hail and shear contours, and the ability to share your subscription across multiple platforms and App Store accounts. Bundle Up
RadarScope for Apple TV is bundled with the iOS version. So if you already have RadarScope for iOS, you get the Apple TV app for free. That also means your RadarScope Pro subscription is shared across iOS and tvOS devices, as long as you’re using the same App Store account on both. Just hit the Restore Purchases button in the Apple TV app’s settings to sync your purchase. Tier Two subscribers can activate a subscription purchased on any platform (iOS, macOS, or Android) by logging into their RadarScope account.

RadarScope Everywhere
With the release of RadarScope for Apple TV, RadarScope is now available on all of your Apple devices whether on your desktop, in your pocket, on your wrist, or in your living room. We’re excited about the possibilities as we work to advance RadarScope on all of these platforms. 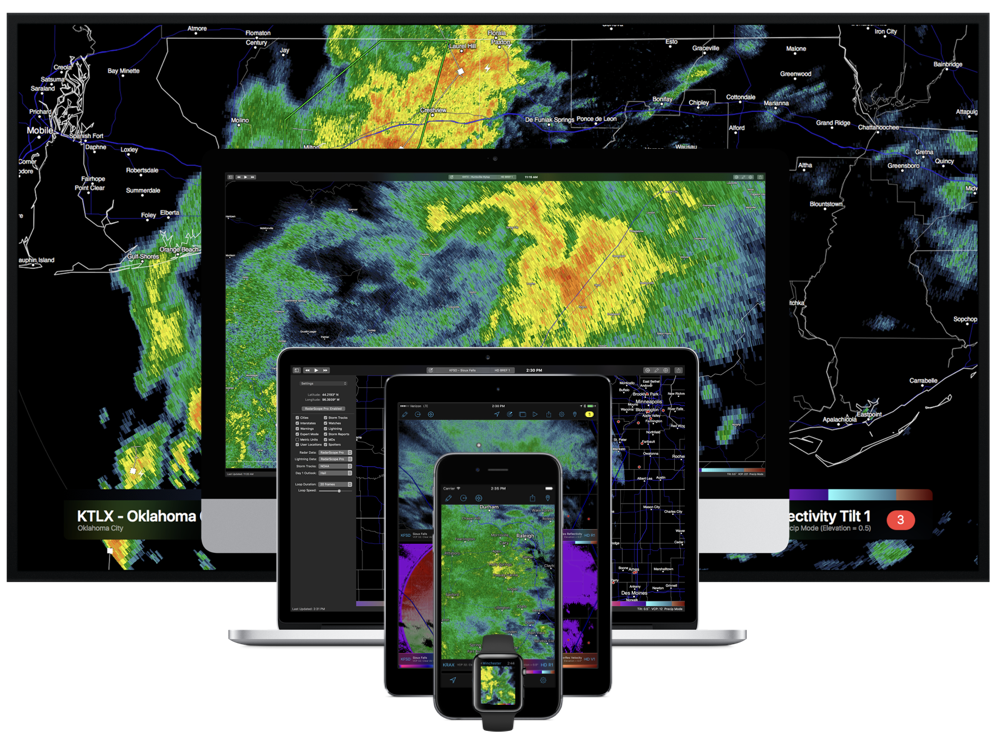