A multi-day severe weather outbreak took place between April 13 and 15, 2018. In total, 61 tornadoes were reported from Louisiana to Virginia, resulting in only one fatality. Out of all these tornadoes, 43 were reported across Arkansas and Louisiana.

In Arkansas, the Mountainburg tornado developed during the afternoon of April 13 and had peak winds estimated between 110 and 120 mph with a path length of 11.4 miles and width of 1000 yards. The tornado was rated as an EF-2 due to the damage that was done. Four injuries were reported in the 15 minutes that it was on the ground.

Here is a view of the Reflectivity and Storm Relative Velocity as the storm approaches Mountainburg in RadarScope. Looking southwest of Mountainburg on the Reflectivity, you can see a hook-shaped appendage. In the area where the hook echo is located, winds are blowing toward (green) and away (red) from the radar creating a circulation. The tornado is located within this hook echo. 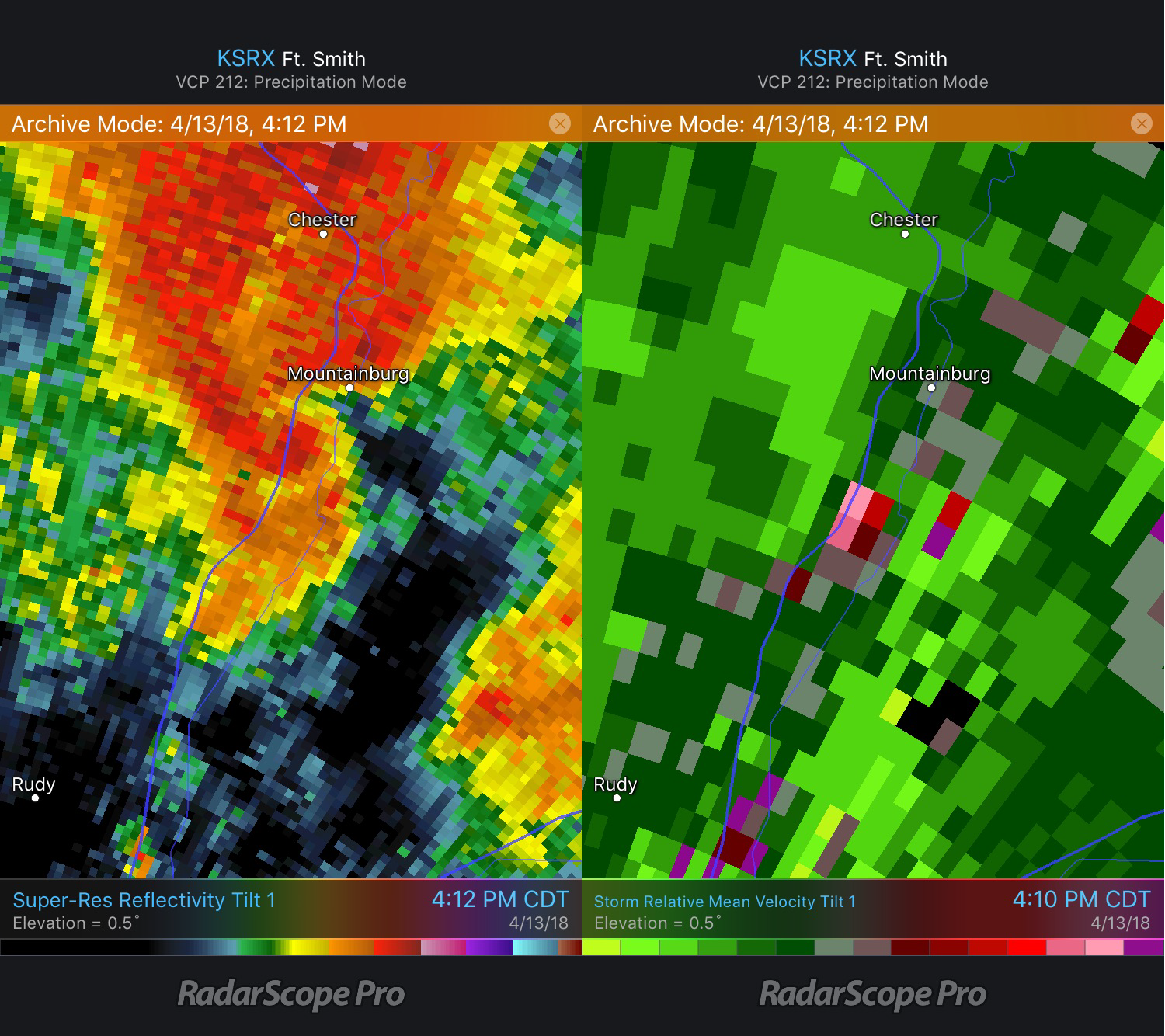 Around 9 pm Friday night, a tornado touched down four miles west-southwest of Rayville, Louisiana and lifted two miles west-northwest of Rayville. The tornado was rated an EF-0 with maximum winds estimated at 85 mph and was on the ground for 6 minutes, traveling 3.28 miles.

In the Storm Relative Velocity image, you can see very weak rotation starting to develop to the west-southwest of Rayville near where the tornado was reported four minutes later. 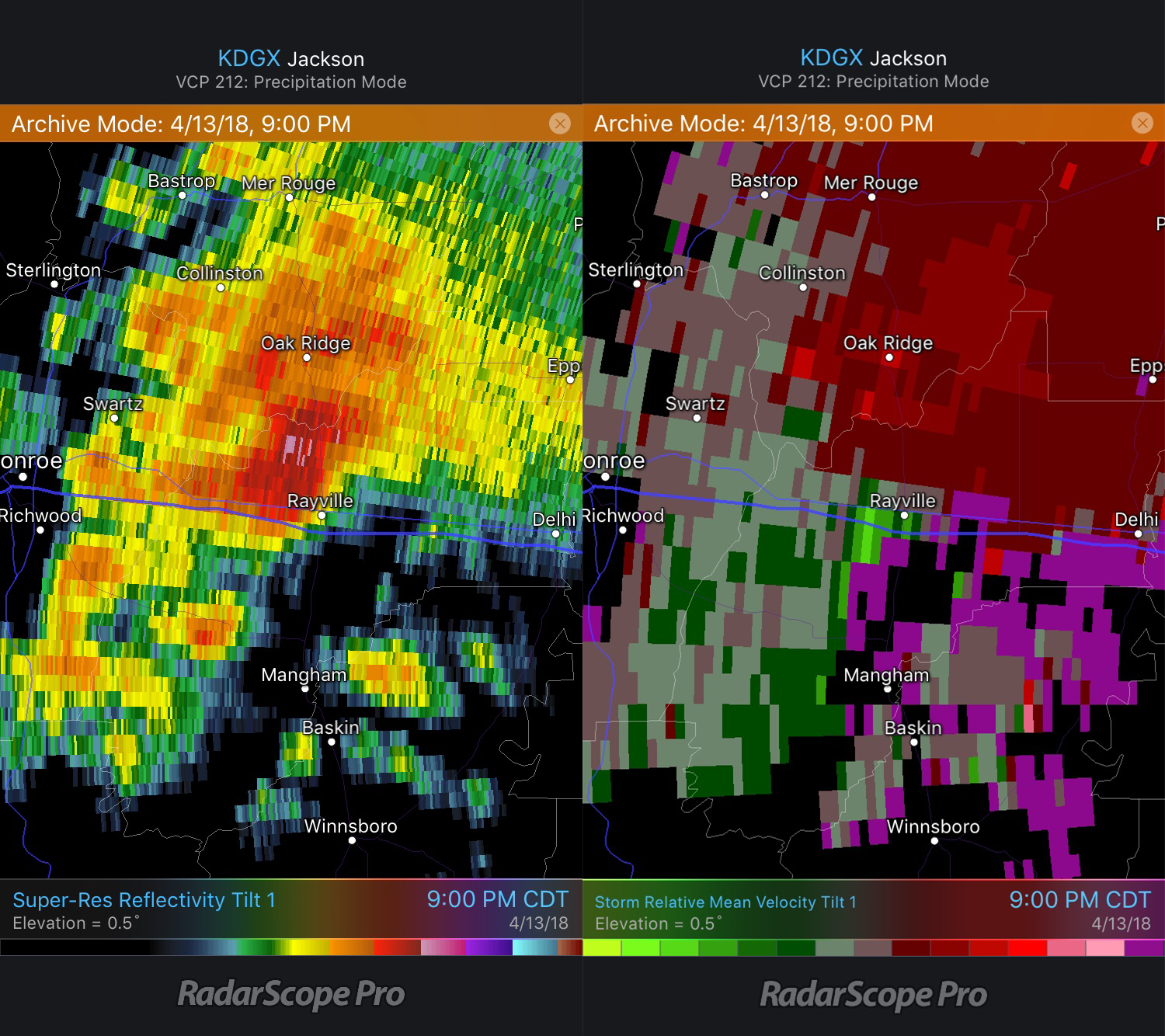 Early Saturday morning, a tornado was reported near Downsville, LA in northwestern Louisiana. It was first reported four miles south of Downsville at 2:24am and was on the ground for 7.71 miles, according to the NWS survey. Rated an EF-1 with winds 95-105 mph, several trees were damaged and uprooted; one of these trees was a pecan tree estimated to be 100 years old.

A faint velocity couplet can be seen just to the southwest of Downsville. Comparing this with the reflectivity, you can also see a slight bulge in the reflectivity in the area of the rotation. The tornado was likely located within this bulge. 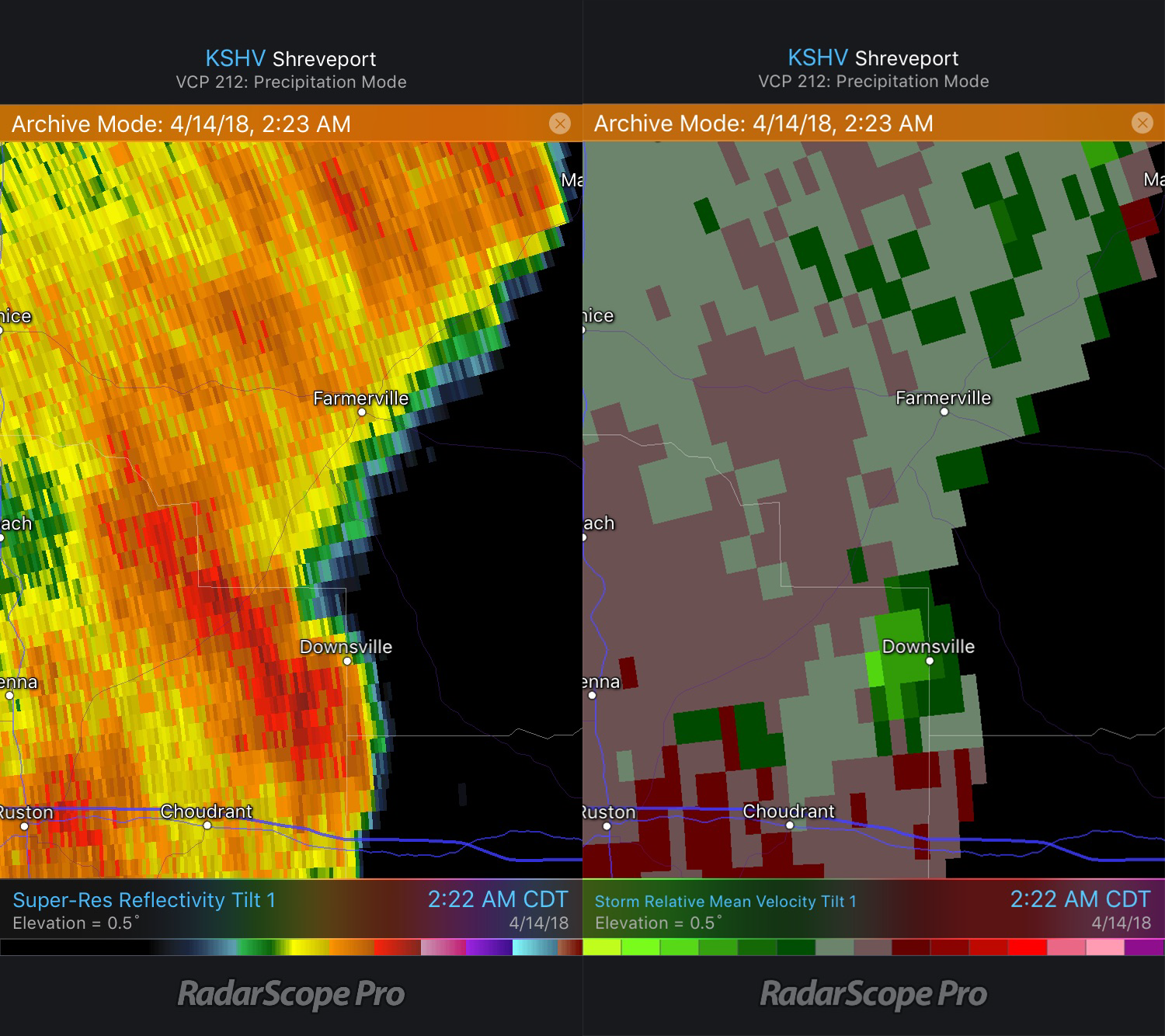 An EF-2 tornado in Montrose, Arkansas also occurred Saturday morning. Striking in the middle of the night at 3:22 am, the peak winds were 115 mph, and it had an 8.9 miles long path that was 700 yards wide. Homes and trailers, as well as a store, were damaged.

Below is a look at the reflectivity and storm relative velocity images from the Montrose storm. The rotation is located between Portland and Montrose. While there is not a clear hook associated with this storm, the couplet in the Storm Relative Velocity image near Portland indicates rotation. The tornado was reported two miles north-northeast of Portland and a few utility poles were damaged according to storm reports. 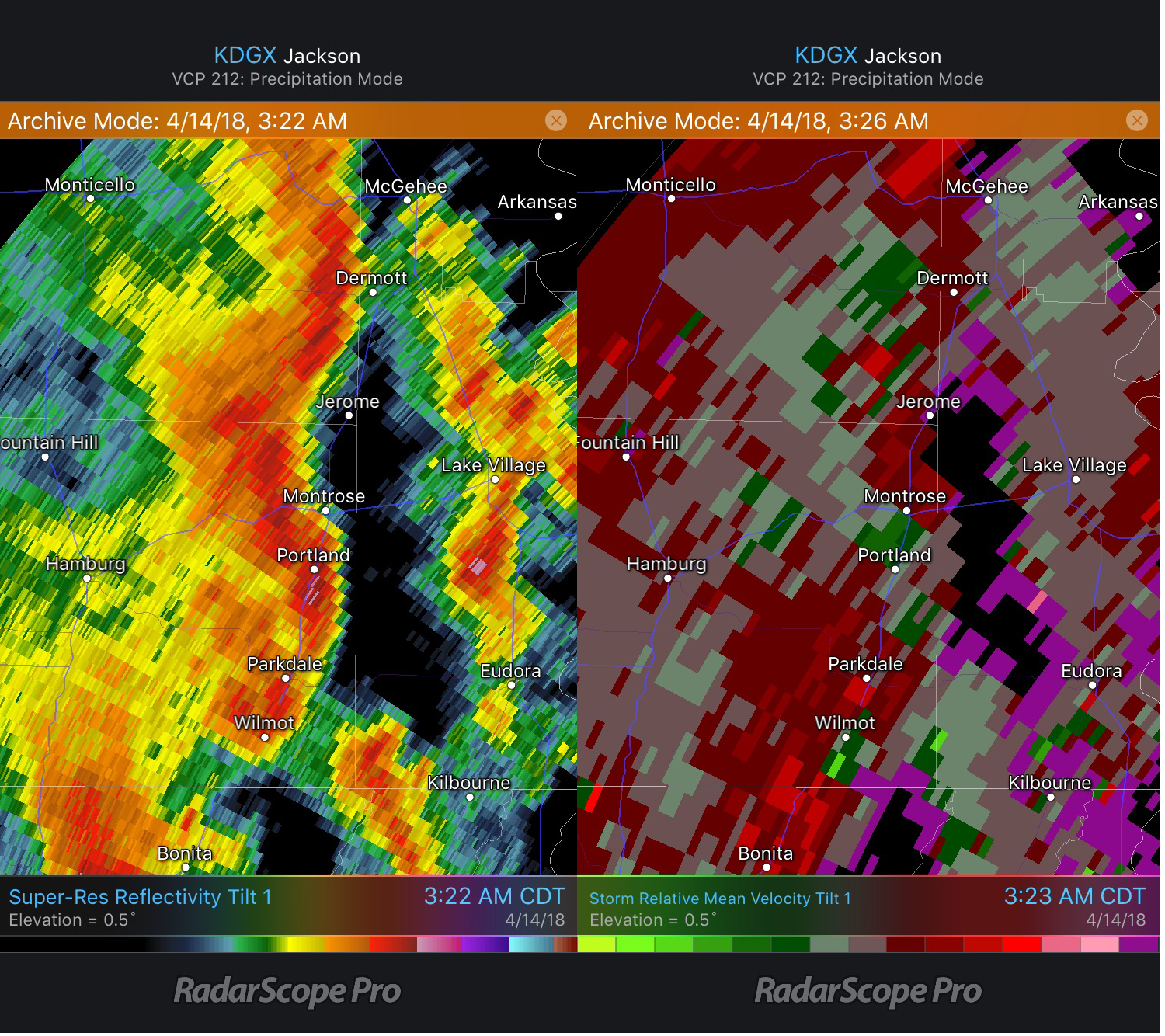 On the evening of the 15th, storms affected portions of Virginia and North Carolina. Around 7 pm, a tornado touched down in Timberlake, Virginia. It was on the ground for 20.4 miles and had a width of 600 yards. Homes were destroyed, and a motorhome was lifted 30 feet in the air. Twelve people were injured as a result of this tornado.

Here’s a look at the radar around the time it touched down. Note the comma shape from Timberlake to the southeast of Brookneal. When this type of signature appears, the northern comma head is usually where the tornado is located. Looking at the velocity in the comma head, the motion is northeastward near Timberlake and southwestward west of Rustburg. Over the next 20-30 minutes, this signature continued to move northeastward toward Lynchburg.

A total of 29 injuries and one tornado-related fatality was reported over the span of this event. The highest winds reported, 150 mph, were associated with the EF-3 tornado in Virginia. Of the 61 tornadoes, 13 were rated EF0, 38 were rated EF1, nine rated EF2, and 1 EF3.

Recognizing rotation associated with velocity products and signatures in reflectivity data can help identify areas where a tornado may be located. While a couplet can indicate the possibility of a tornado, it should not be used to confirm the existence of a tornado. For storms close to the radar, a Tornado Debris Signature may exist, indicating possible debris being lofted into the air. However, the only absolute way to confirm whether a tornado is occurring is from spotter reports.