One of the new features in RadarScope Tier 2 is the addition of hail size and shear contours. If you are wondering what size of hail may be falling, you can now get a more precise idea. And while we can’t detect a tornado, we can definitely show you if that storm is rotating.

You must turn a contour layer on before they show up on your screen. First, go to “Layers” and make sure that you see “Pro 2” in blue next to where it says “Derived Contours”. Tap here and you will be given the choice on see no contours, hail size, or azimuthal shear. Choose which one you are interested in viewing. Only one type of contour is available at a time. 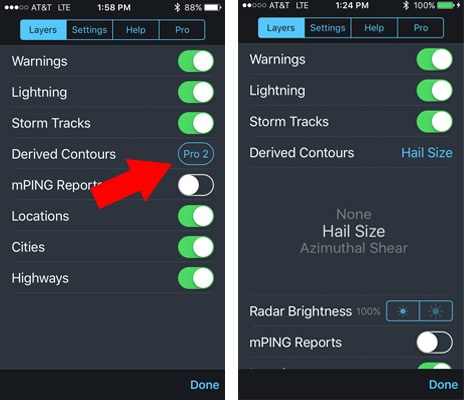 Hail Contours
The hail size contours in RadarScope are primarily derived from reflectivity, differential reflectivity, and correlation coefficient. WDT uses these variables, and a couple others, to classify what type of particles are most likely present in each pixel, including small, large, and giant hail size bins similar to what is shown in the Hydrometeor Classification field in RadarScope. Hail is often identified in areas with high reflectivity (> 55 dBZ), low differential reflectivity (closer to 0 dB), and low correlation coefficient (< 0.95). The more pronounced this signal is (higher reflectivity, lower differential reflectivity and/or correlation coefficient), the larger the inferred hail size. The amount of reflectivity in the mid-levels of the storm where hail grows (generally several kilometers above the ground) also contributes to the hail size estimates. These inferred hail sizes from each radar’s dual-polarization data are then merged together into a national mosaic every 2.5 minutes. We compute the maximum hail size at each point since the beginning of the day (starting at 06 UTC, which is 1am CDT), do some smoothing, then create the contours in increments of 0.25” from 0.75” to 4”. This means the contours will begin at 1am CDT and update regularly throughout the day until the 24 hour period is over. 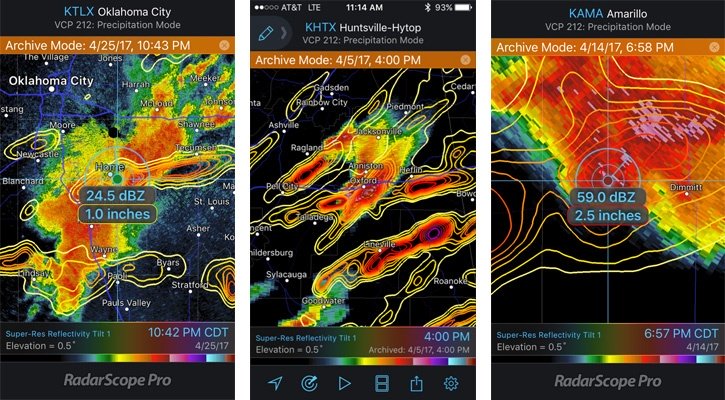 Shear Contours
This product is derived from the super-res velocity data that can be seen in RadarScope. There are two basic types of wind shear (change of wind speed and/or direction over some distance) that can be directly detected by a single radar scan. One is azimuthal shear, which is opposing inbound/outbound velocities at the same distance in nearby radials (azimuth is simply the direction the radar is looking, so azimuthal shear is the change of wind velocity with azimuth). This is the type of shear used to identify things like mesocyclones and tornadoes, and is the type that is used to create the shear contours displayed in RadarScope. Within each radar volume, we identify the maximum azimuthal shear within the lowest 3 km above ground level. We then merge these shear fields for each radar into a national mosaic every 5 minutes. We compute the maximum shear at each point since the beginning of the day (starting at 12 UTC, which is 7am CDT), do some smoothing, and create the contours. Similar to the hail product, shear contours will begin at 7am CDT and update regularly throughout the day until the 24 hour period is over. Some caveats of the product: 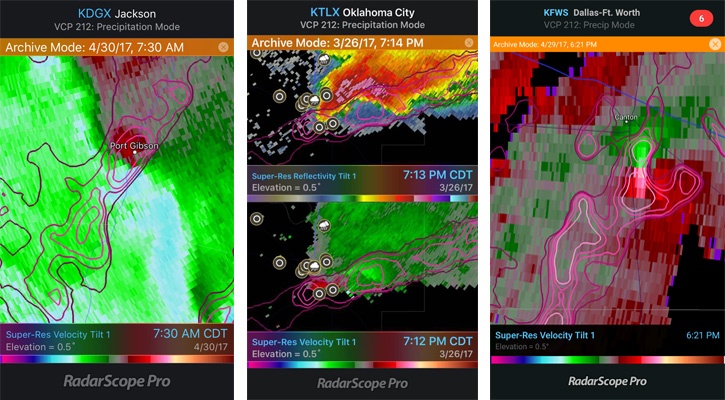 Whether you’re scanning velocity for shear or trying to figure out where the largest hail is falling, RadarScope Tier 2 gives you the power to learn the most from your weather radar data.