On October 14, 2017, a wind event occurred across Oklahoma, Kansas, Missouri, and Illinois. While some small hail was reported, the majority of storm reports were for wind damage associated with a strong cold front. Out of nearly 100 preliminary reports, 87 were due to wind. However, two reports were for tornadoes.

Luckily, the tornadoes on Saturday evening were not very strong. An EF-1 was reported 2-miles west of South Goren, Missouri and EF-0 damage was found 1-mile west of Bowen, Illinois.

But what if the Bowen tornado had been stronger? Sometimes it can be hard to get precise radar data of a storm. In this case, Bowen is covered by three different National Weather Service (NWS) radars. Let’s take a look at what we could see on RadarScope. 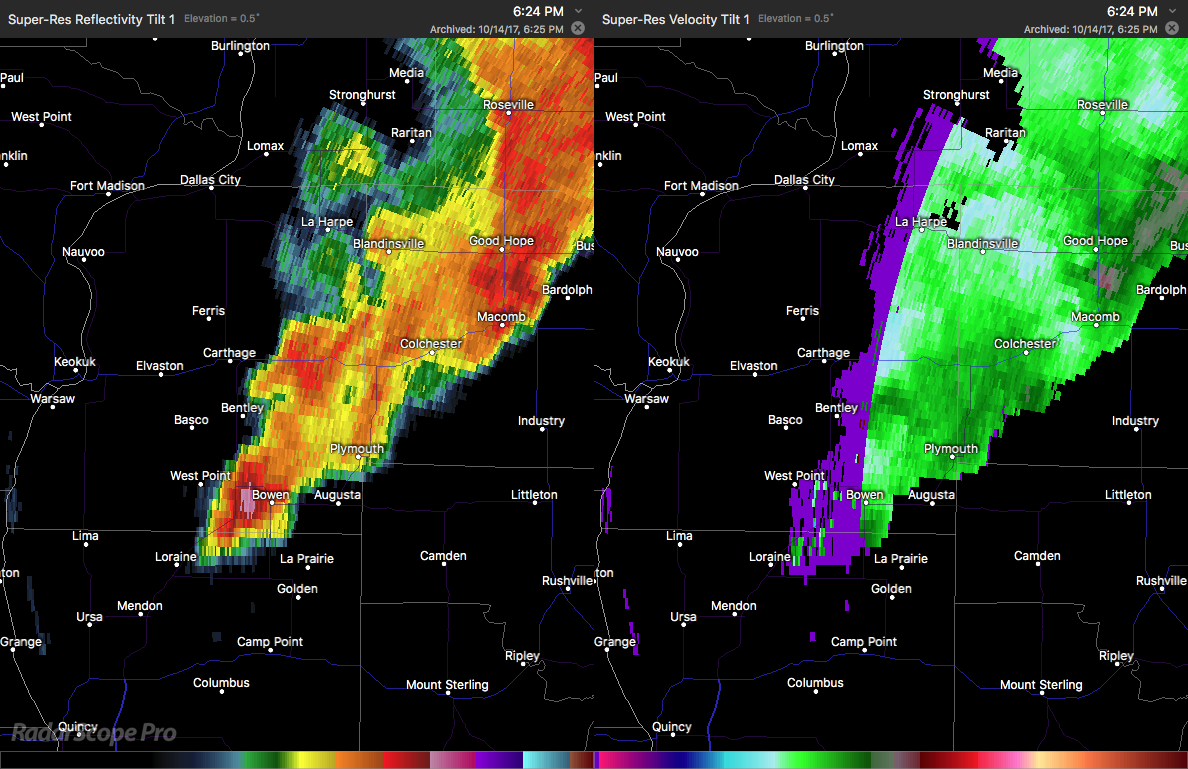 Our first screenshot is taken at the reported tornado time from the KILX radar in Lincoln, Illinois, located to the east of Bowen. While a strong cell shows up in reflectivity data, range-folding covers the associated velocity signal. 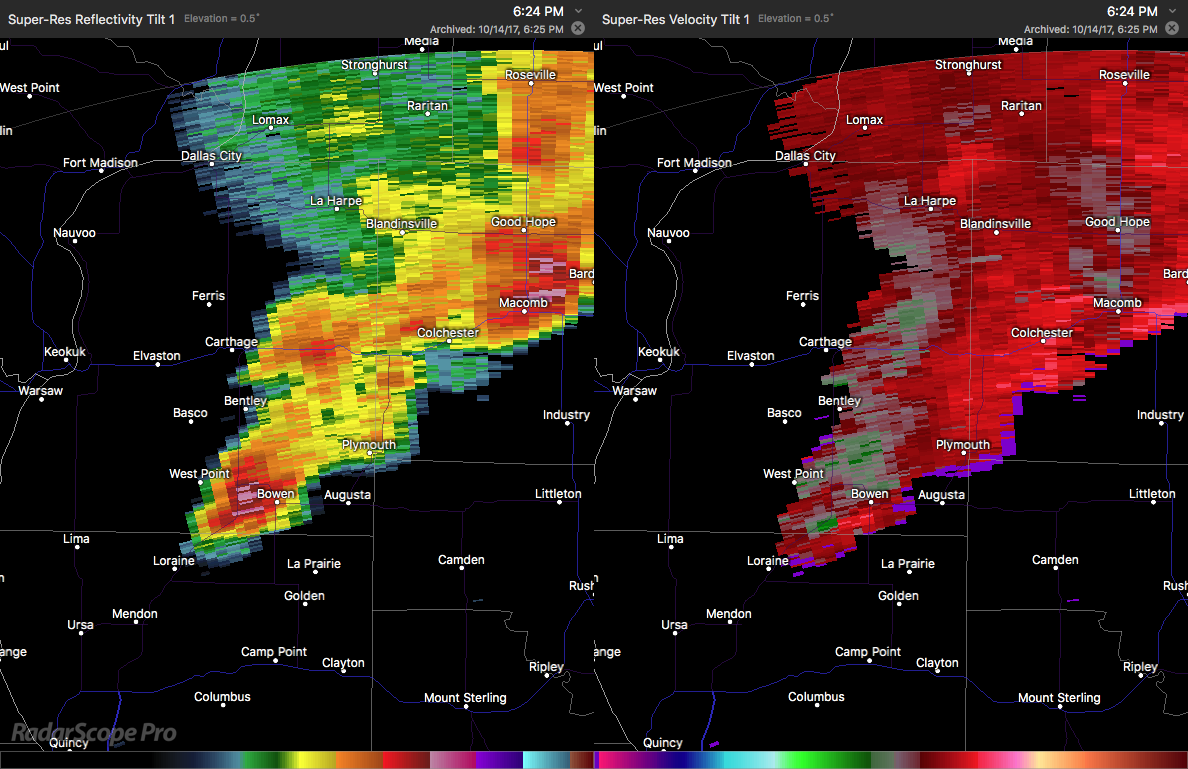 Our next RadarScope image comes from the KLSX radar in St. Louis, which can be found to the south of the tornado location. Once again, reflectivity shows a hefty rain cell in the right location. However, we are very close to the furthest distance this radar can see. That means the beam is shooting high up in the storm, so velocity data is not showing low-level rotation. 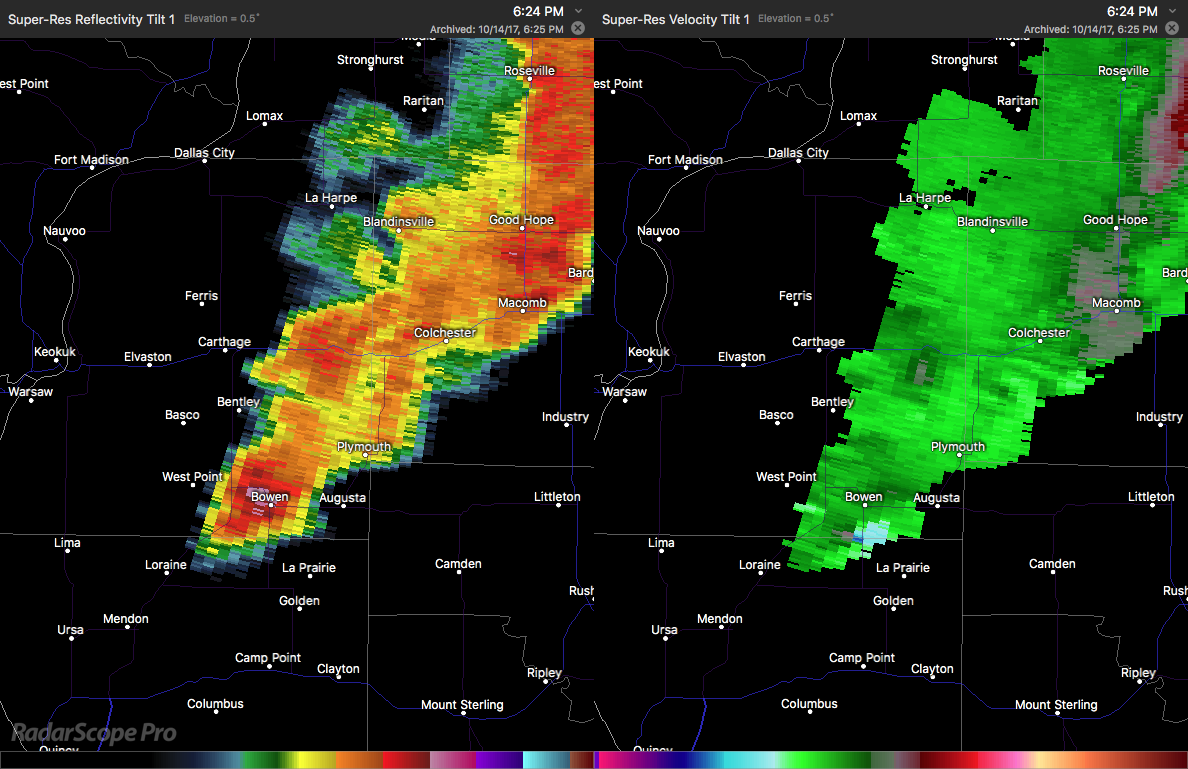 Our final image comes from the northern KDVN radar in Davenport, Iowa. Success! We can see the severe thunderstorm in the reflectivity data and a sign of rotation in the velocity data.

In each case, the radar was not very close to the location of the tornado. Even on KDVN, we are looking quite far from the radar. So, the lesson here is to use more than one radar when viewing a suspect severe storm as you may not always get the best data by using just one view. RadarScope provides not only a plethora of data but also all NWS radars across the country. Don’t forget to use this valuable information when analyzing storms.