When hurricanes and tropical storms make landfall, tornadoes can often become a byproduct. Usually, these tornadoes are weak. However, they can occasionally be strong enough to produce significant damage.

Tornadoes in the Plains often have distinct signatures, such as the hook echo associated with a supercell, but this is not the case for those that come from tropical systems. Sometimes they are not seen because the radar beam is overshooting the rotation, or the tornado could be so short-lived that it may not appear in a radar scan. The RadarScope reflectivity and storm relative velocity image below are from a tornado-producing storm near Roseboro, North Carolina due to Hurricane Florence. 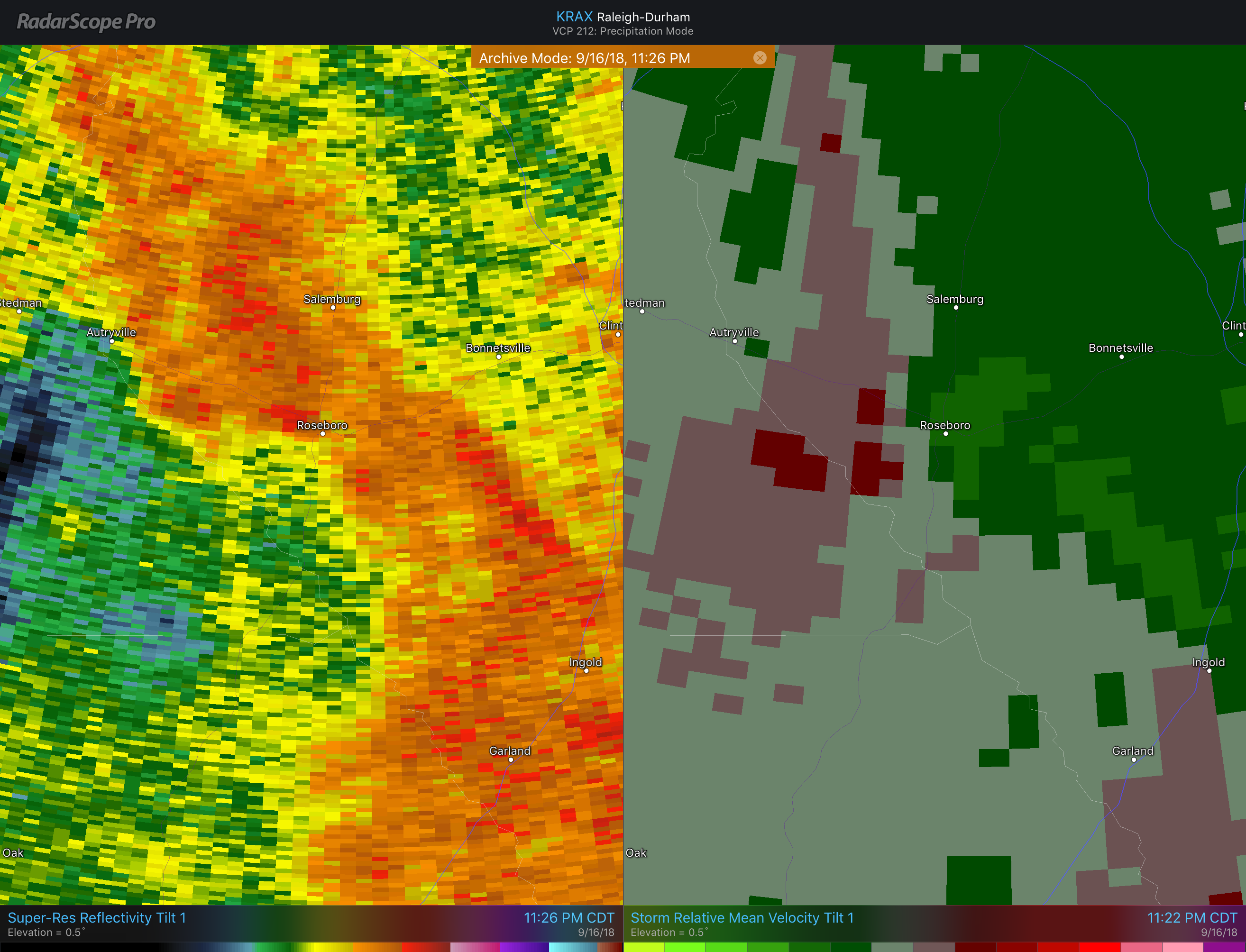 Some weak rotation can be seen just to the northwest of Roseboro. While the rotation was relatively weak, the tornado produced a Tornado Debris Signature shown here in dual polarization data. 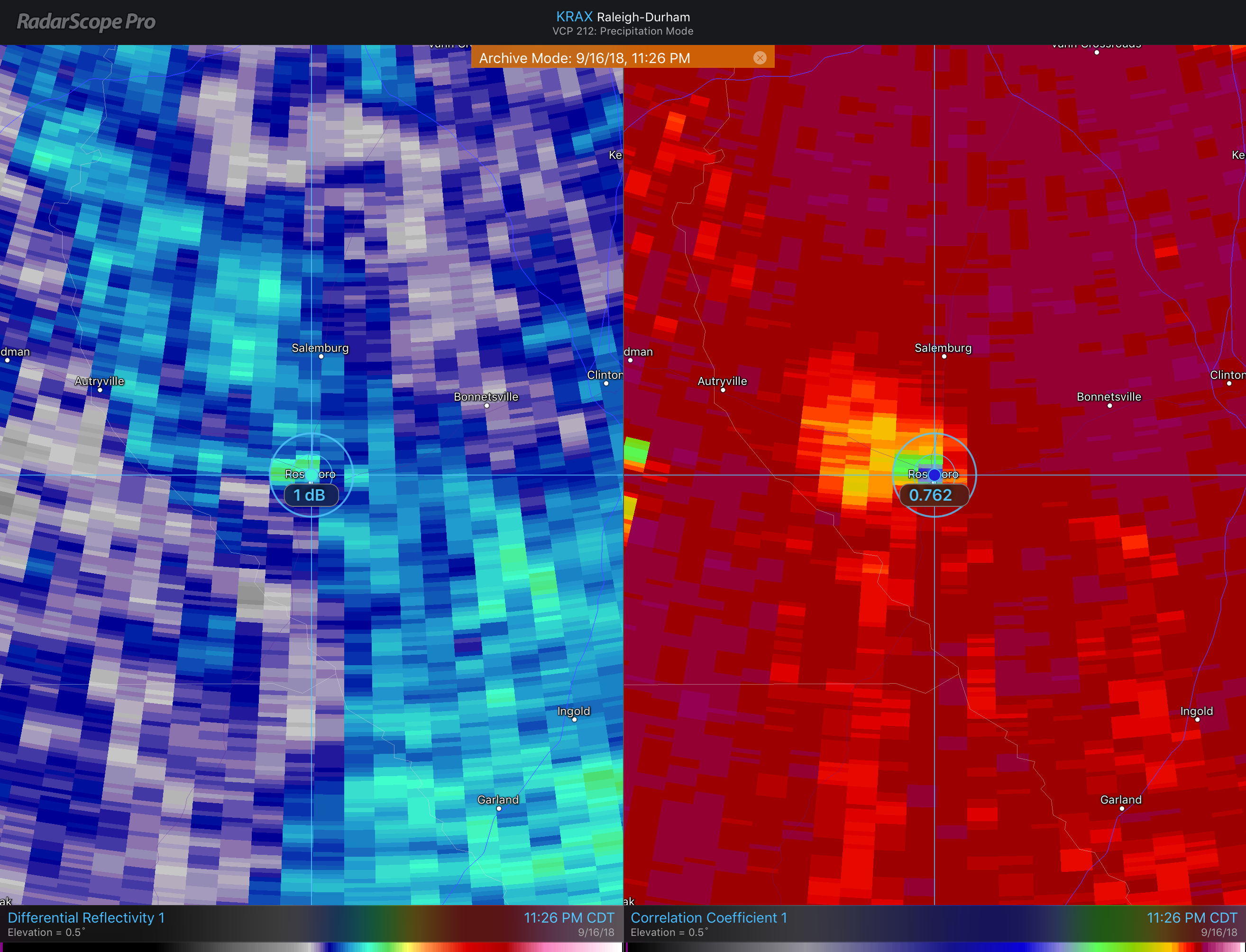 Low differential reflectivity and correlation coefficient near the velocity couplet suggests that the radar may be detecting debris that is lofted by the tornado.

Just some of the damage in Sampson County after a possible tornado touched down in Roseboro. pic.twitter.com/6uRlPZoJp9

Not all tornadoes produced by tropical systems are weak. On the afternoon of September 17, 2018 several strong tornadoes occurred across portions of Virginia as remnants of Hurricane Florence passed through. One such tornado occurred near Midlothian, Virginia southwest of Richmond around 3:30 pm EDT. 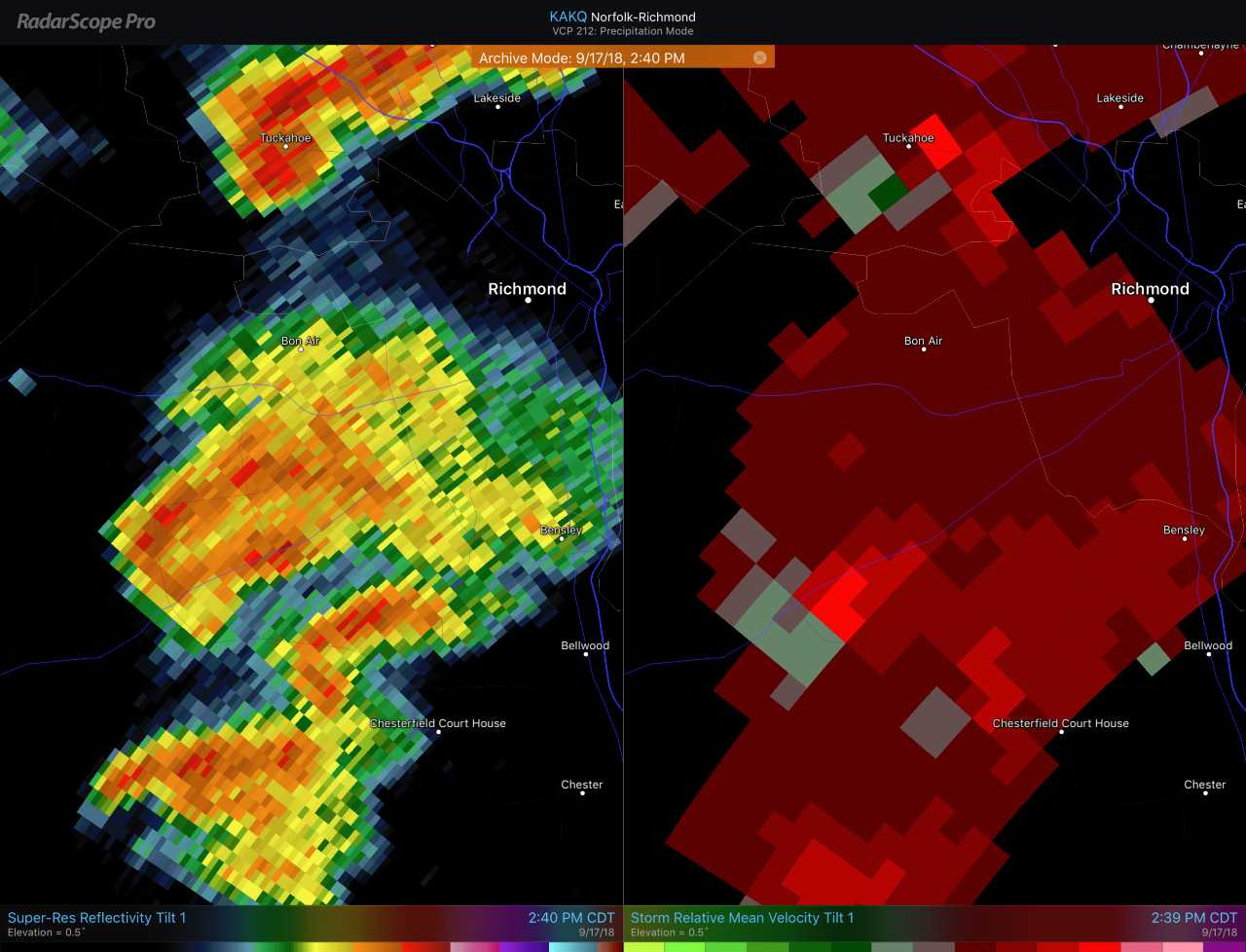 Reflectivity and Storm Relative Velocity of a Tornadic Storm near Midlothian, Virginia on September 17, 2018

Looking west-southwest of Bon Air, we see an area of rotation. Let’s see if there’s a debris signature associated with this storm. 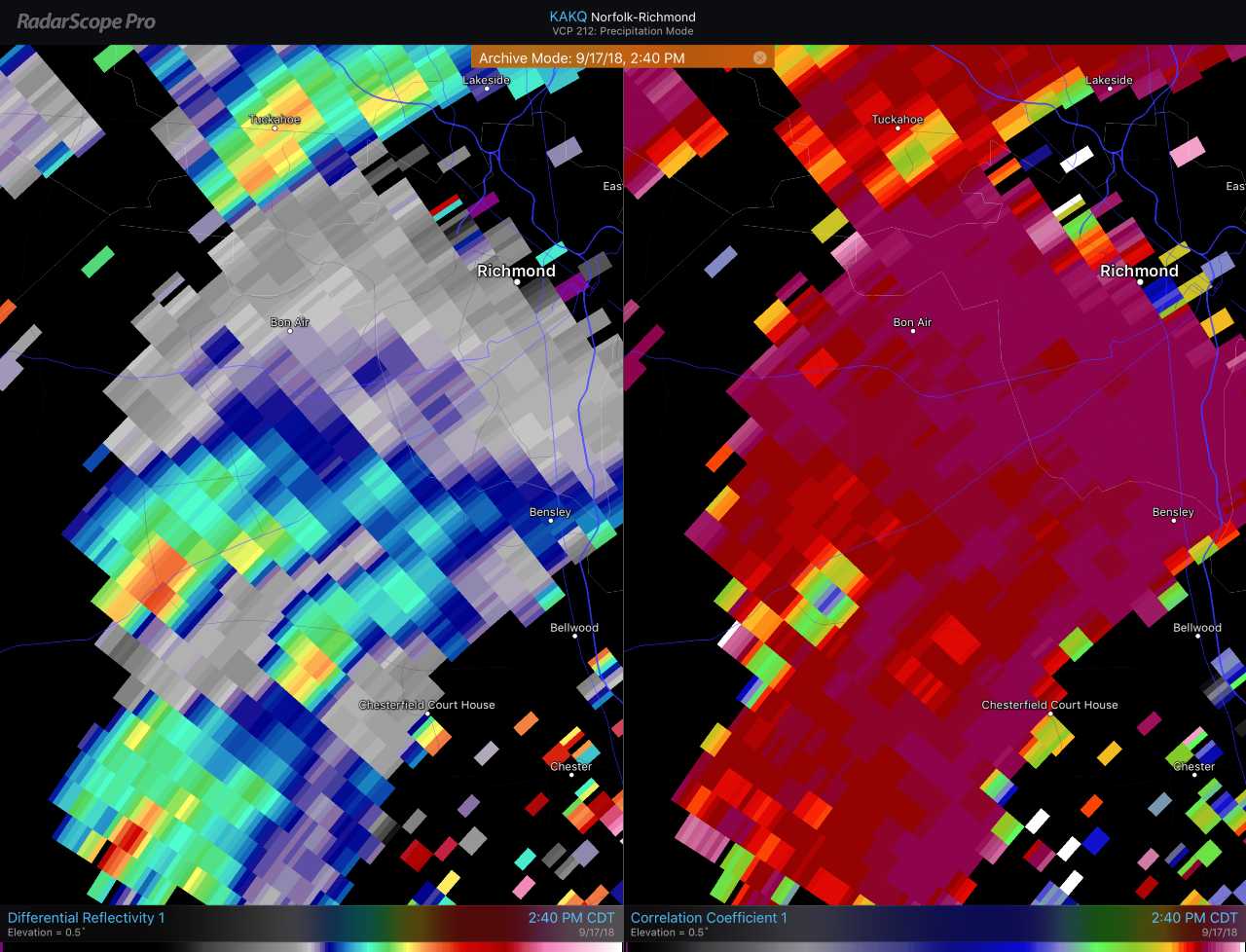 Looking at the differential reflectivity, the values are near zero near the rotation, and there are some low correlation values, which could be debris.

Unbelievable tornado video just west of Richmond, VA in the town of Midlothian, VA where a roof gets ripped off. #VAwx pic.twitter.com/mFaMJNP9Ao

About 10 minutes later, there were several areas of rotation west of Richmond. One especially notable signature is south-southwest of Bon Air. Here is a look at the reflectivity and storm relative velocity at 3:48 pm EDT. 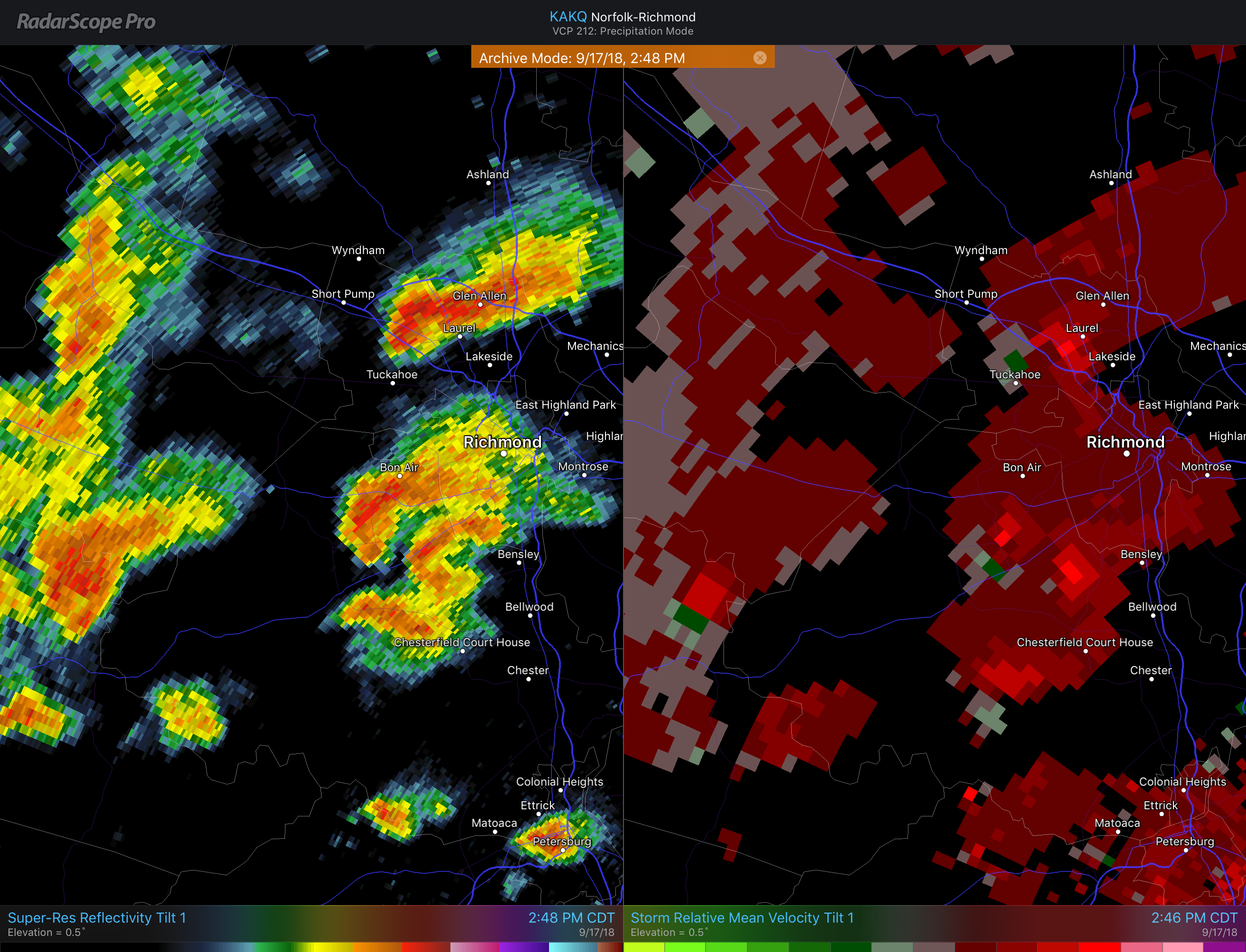 Once again, we can look at dual polarization products to search for debris. It’s important to note that the low values of both differential reflectivity and correlation coefficient must be collocated with the area of rotation. 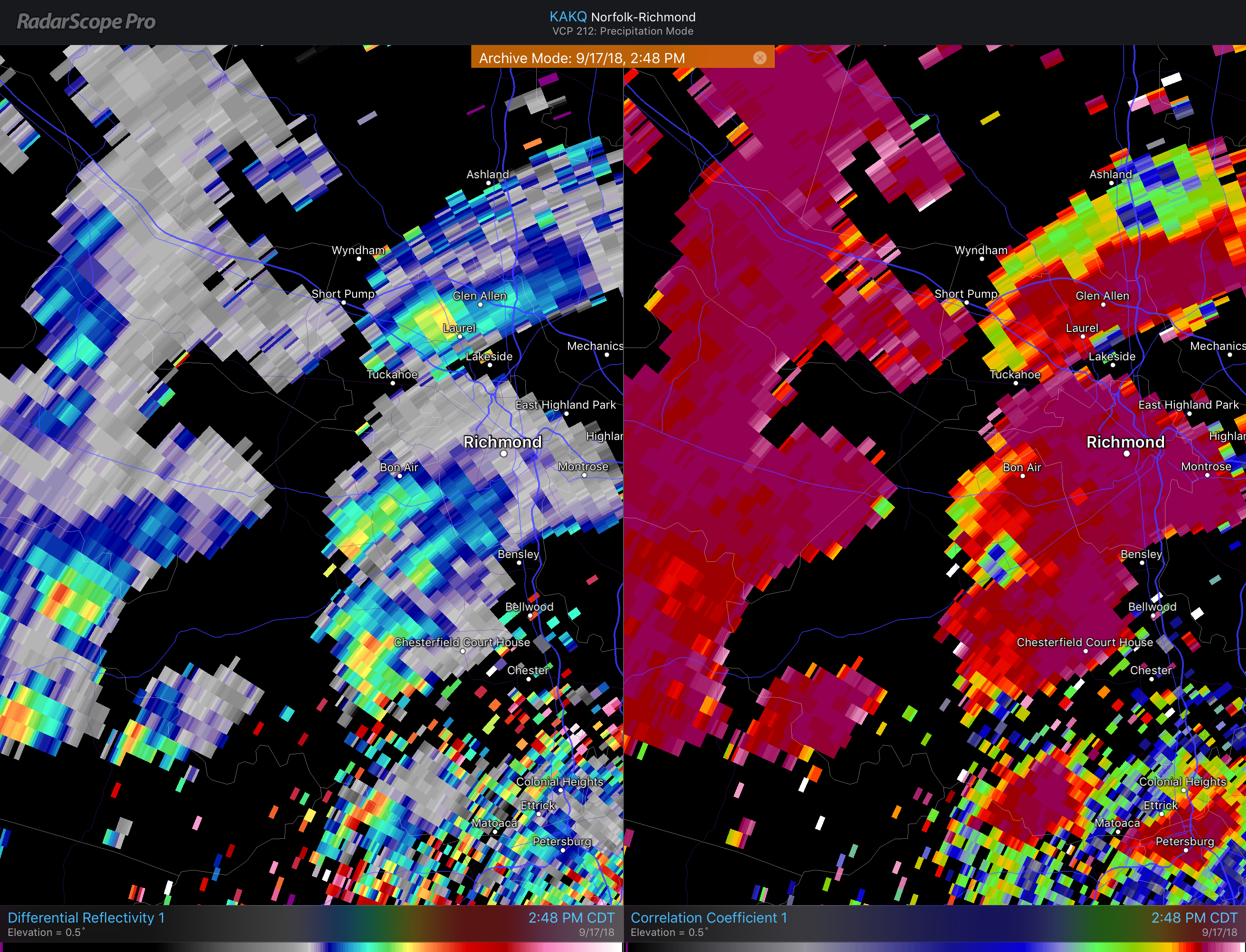 Comparing the last two images, you can see the low values of differential reflectivity and correlation coefficient near the rotation signature. This is evidence that a tornado is likely occurring and lofting debris.

Large Tornado near Richmond, VA around 4:00 PM EDT. (Picture via Brad Sowder). There has been reports of damage as well. #tornado #vawx pic.twitter.com/nHWYLy4845

Tornadoes associated with tropical systems are usually weak, however, as seen above, they can occasionally do considerable damage. Identifying the rotation signatures can point you to areas where a tornado is developing or may have developed. Dual polarization signatures can indicate whether the tornado is lofting debris into the air.  Using these products in conjunction with each other can give you an idea of if a damaging tornado is occurring.

PREVIOUS POSTDo You Know What Tornado Debris Signatures Look Like?
NEXT POSTInside the Hail Detection Algorithm