What Can You See on Radar Other Than Rain?

Usually, meteorologists and other weather observers use reflectivity to identify where precipitation is falling and how heavy it is. However, sometimes radars detect things that are not precipitation (the fancy term for the source of these echoes is “non-hydrometeor scatterers” or “non-meteorological scatterers”). Often, these have an unusual appearance to observers that are used to looking at precipitation, which causes people to ask “what is that?” This series of blog posts will describe several of the most common forms of non-precipitation echoes and how to use RadarScope and sometimes other meteorological data to determine the most likely explanation (usually not bats or aliens, despite the comments in the RadarScope users group on Facebook). Many of these features will only be visible on RadarScope with Expert Mode turned on, as they have relatively low reflectivity values.

The first category we will look at is atmospheric boundaries and circulations. These are meteorological features, but the reflectivity we can see on radar is a result of stuff that is not precipitation (usually insects). In general, these are regions of converging wind, and insects or other things that drift with the wind are also concentrated along the boundary. They generally appear on radar as a long, thin line of reflectivity, rarely exceeding 30 dBZ. Examination of velocity data will usually show convergence. These boundaries are frequently favored areas for thunderstorms to initiate, which is one reason they are meteorologically significant even though the reflectivity is not a result of precipitation. Here are several different examples of boundaries.

1. Thunderstorm Outflow Boundaries/Gust Fronts
Outflow and gust fronts are probably the most commonly observed type of boundary that is illustrated by radar. The primary way to distinguish this type of boundary is that it occurs in proximity to a thunderstorm or cluster/line of storms, and moves away from the storm. Sometimes it will spread out evenly in all directions. Other times, it will only appear ahead of the storm in the direction it’s moving, or off to one side and trailing behind the storm along its path. Sometimes the boundary will persist on radar for a time after the storm dissipates. 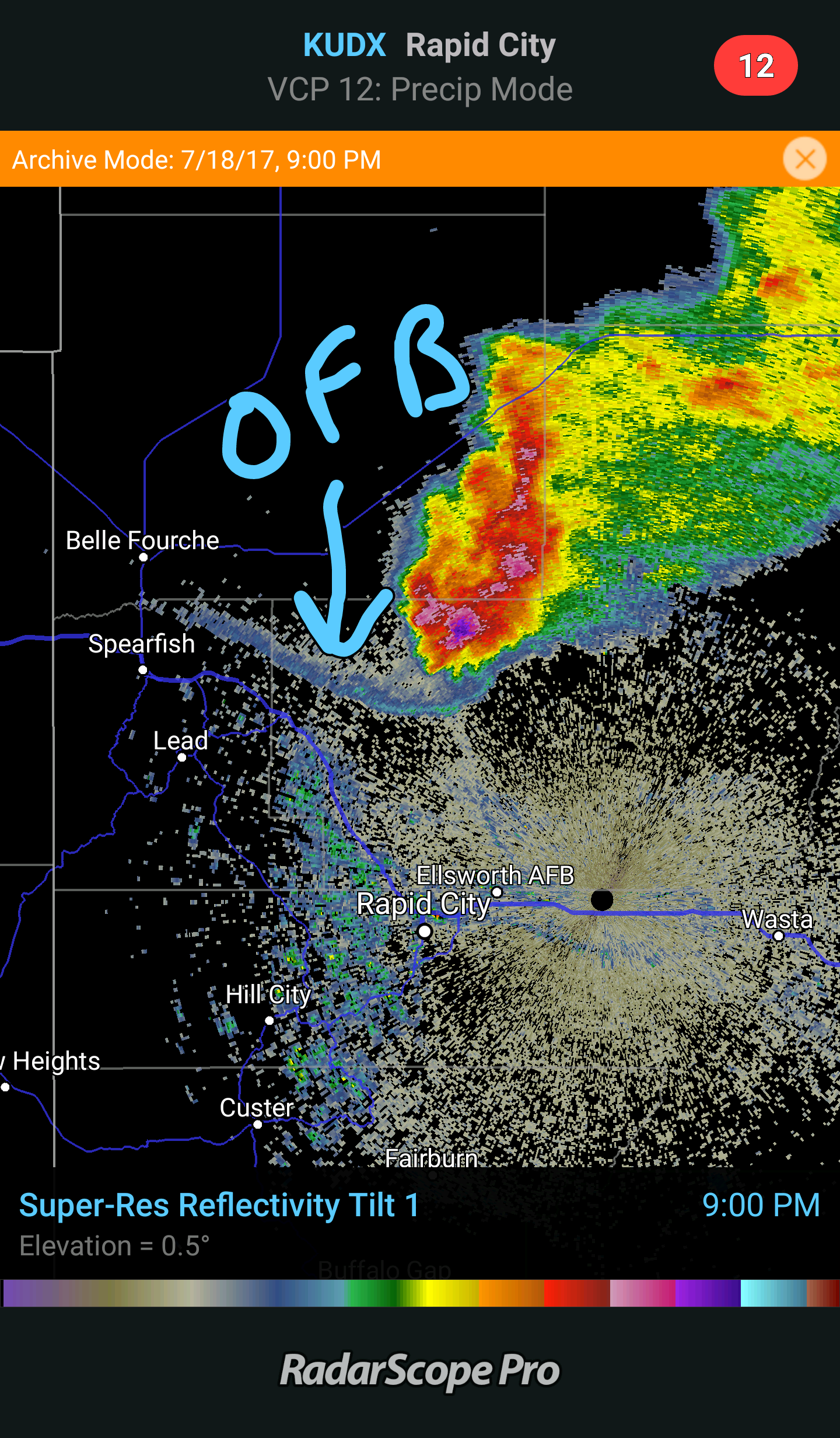 Image of southeast-moving supercell and trailing outflow boundary in South Dakota on July 18, 2017

Circular outflow around storms near Springfield, MO on July 24, 2017

A loop of multiple outflow boundaries from storms near Chicago on July 19, 2017. The most prominent boundary started as a lake breeze, which initiated thunderstorms that then produced cool downdrafts that reinforced the boundary.

2. Sea/Lake Breezes
These boundaries exist near coastlines or large lakes (think the Great Lakes or the Great Salt Lake). During the day, the sun shines on the ground and the water, but the ground heats up faster, so air over it tends to rise. This process induces a circulation that draws cooler air from over the water onto the land. The edge of this cooler air behaves much like a thunderstorm outflow boundary, so the radar characteristics of the two are very similar. The critical difference is that sea or lake breezes occur on most sunny summer afternoons, with or without thunderstorms, and they appear roughly parallel to coastlines either stationary or moving away from the water. Sea or lake breezes are often places where thunderstorms will develop.

Loop of lake breeze from Lake Michigan on August 2, 2017

3. Cold Fronts and Dry Lines
Cold fronts and dry lines show up on radar as long, thin lines of reflectivity that often span more than one radar’s coverage area. They are boundaries between either cold and warm air, or between dry and moist air. These boundaries appear on radar because converging winds at the boundary cause insects, dust, and other wind-borne objects to collect. They can be identified by looking at a national surface analysis map that shows fronts or by examining a map of surface observations looking for pressure, wind, temperature, and moisture changes near the thin line feature you are trying to identify. Cold fronts and dry lines are also common areas for thunderstorms to develop.

Did you see this interaction between the dryline and a cold front last week? If not, now you can with archive data on Tier 2!

4. Horizontal Convective Rolls
These are a form of low-level atmospheric circulation that are visible on radar for the same reason as the other features in this post – the convergence of insects and other wind-borne scatterers due to the converging wind. These are quite common on summer afternoons and tend to show up on radar as a set of parallel lines. They are generally aligned with the prevailing wind, and similar lines of shallow clouds (cloud streets) can often be seen on visible satellite imagery. The lines of reflectivity appear in the zones of upward motion (upward red arrows and small clouds in the right image of the below schematic). They are common during calm weather, but occasionally storms will develop where a roll intersects another boundary, such as a dry line or sea breeze.

Radar image of horizontal convective rolls in Michigan on July 24, 2017 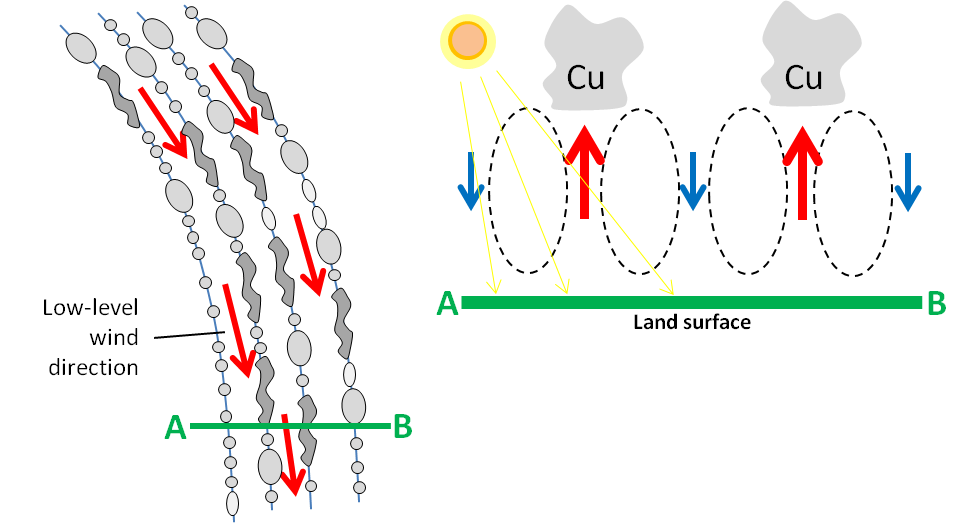 This installment illustrated several examples of atmospheric features that can be seen on radar. Even though they are not precipitation, they are features of meteorological interest. In part 2, we will see some examples of birds, bats, and bugs on radar.