From day one, our goal has been to make RadarScope a full-featured tool for radar data display and analysis. We’ve spent the last eight years working toward this goal with the addition of higher resolution products, higher tilts, dual-polarization data, and supplementary data such as warning polygons and lightning. However, if you delve into the NEXRAD product suite, you’ll find there are still products we haven’t gotten to yet. Storm attributes are one example.

While many of us spend most of the time viewing the Tilt 1 Reflectivity product, it represents just one slice of the full volume scan that the radar completes every few minutes. After completing a full 360 degree rotation for tilt 1, the radar angles its beam slightly upward and does another rotation. This is repeated multiple times until the radar completes what is called a full “volume scan.” The four tilts you see in RadarScope are slices taken from varying angles with this volume scan. By looking at the full volume scan, important storm features can be detected that might otherwise be missed. NOAA scientists and engineers have developed computer algorithms to process full volume scans in search of these features. The output of those algorithms is distributed in the NEXRAD Level III product suite as the Hail Index, Mesocyclone Detection, and Tornado Vortex Signature products.

The hail index algorithm detects conditions that are conducive to the formation of hail. It provides an estimate of the probability of hail, probably of severe hail, and the maximum expected hail size. The data are produced and distributed for each radar once per completed volume scan. 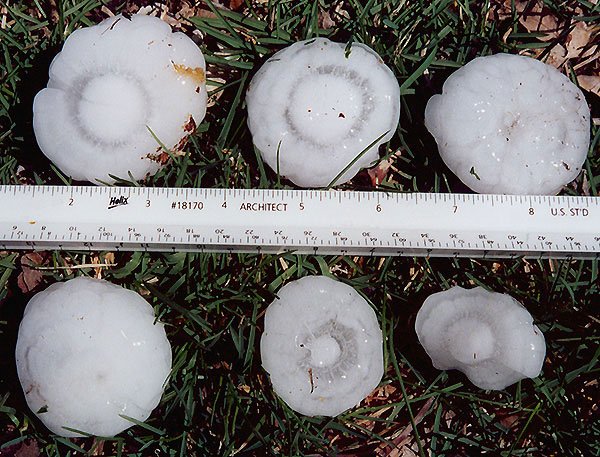 A mesocyclone is formed when air rises and rotates around a vertical axis in a convective storm. They are most often associated with a low-pressure region within the storm. Mesocyclone features are generally a few kilometers in diameter. They can be associated with strong surface winds, hail, and sometimes tornadoes. Doppler velocity can be used to detect the rotation when high velocities with opposite signs are seen in close proximity. The detection algorithms produce several attributes, including estimated motion, depth, and maximum rotational velocity. 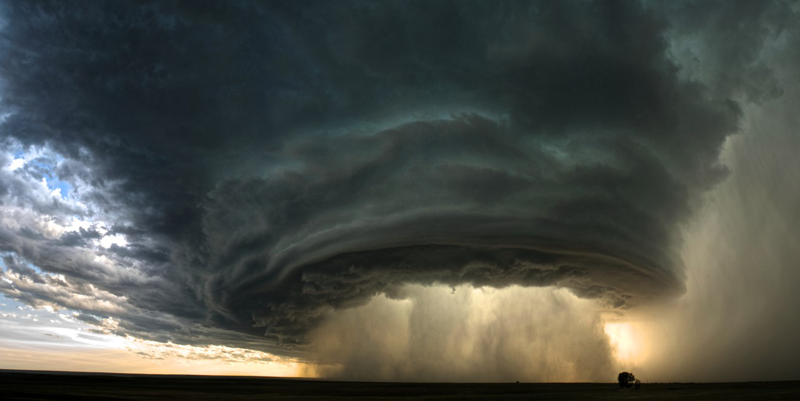 A Tornado Vortex Signature (TVS) indicates the presence of a strong mesocyclone that is in some stage of tornadogenesis. The conditions for a TVS can often be seen in a storm relative velocity product as a strong gate-to-gate shear, in which two neighboring radar data pixels have high values with opposite signs. In RadarScope, this would be a tight grouping of red and green pixels from opposite ends of the color scale next to one another in the image. Because the radar is detecting conditions higher in the air and not at ground level, a TVS is often a strong rotation aloft without an associated tornado on the ground. A TVS can be used to infer the presence of a tornado when it occurs in conjunction with a debris signature or through visual confirmation. 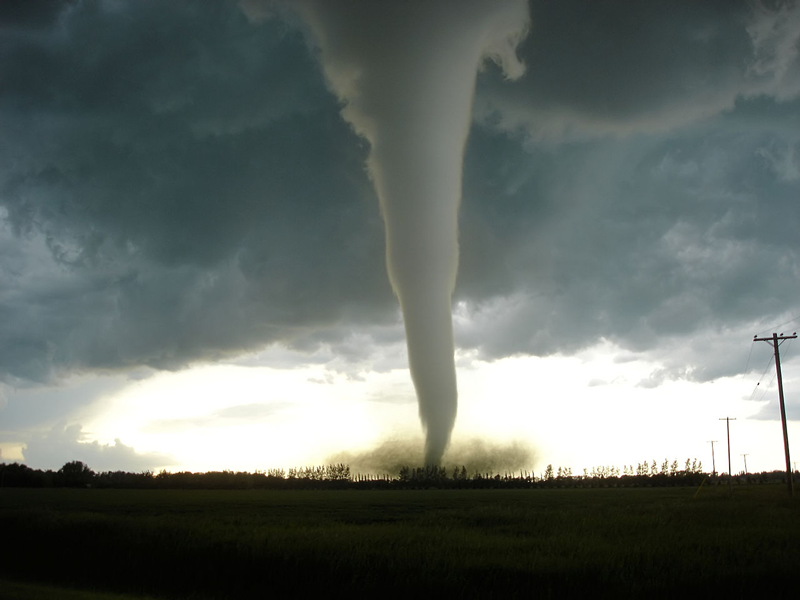 Storm attribute algorithms are sophisticated computer programs based on years of studying the atmosphere and radar data. Like any algorithm or computer model, they aren’t perfect. There can be both false positives and negatives. Used wisely and with knowledge of their limitations, they’re an important tool to help separate the signal from the noise and draw attention to interesting and significant features in the data during severe weather situations. Don’t be surprised if you see them in a RadarScope update in the not-too-distant future. It might even look something like the screen shot below. 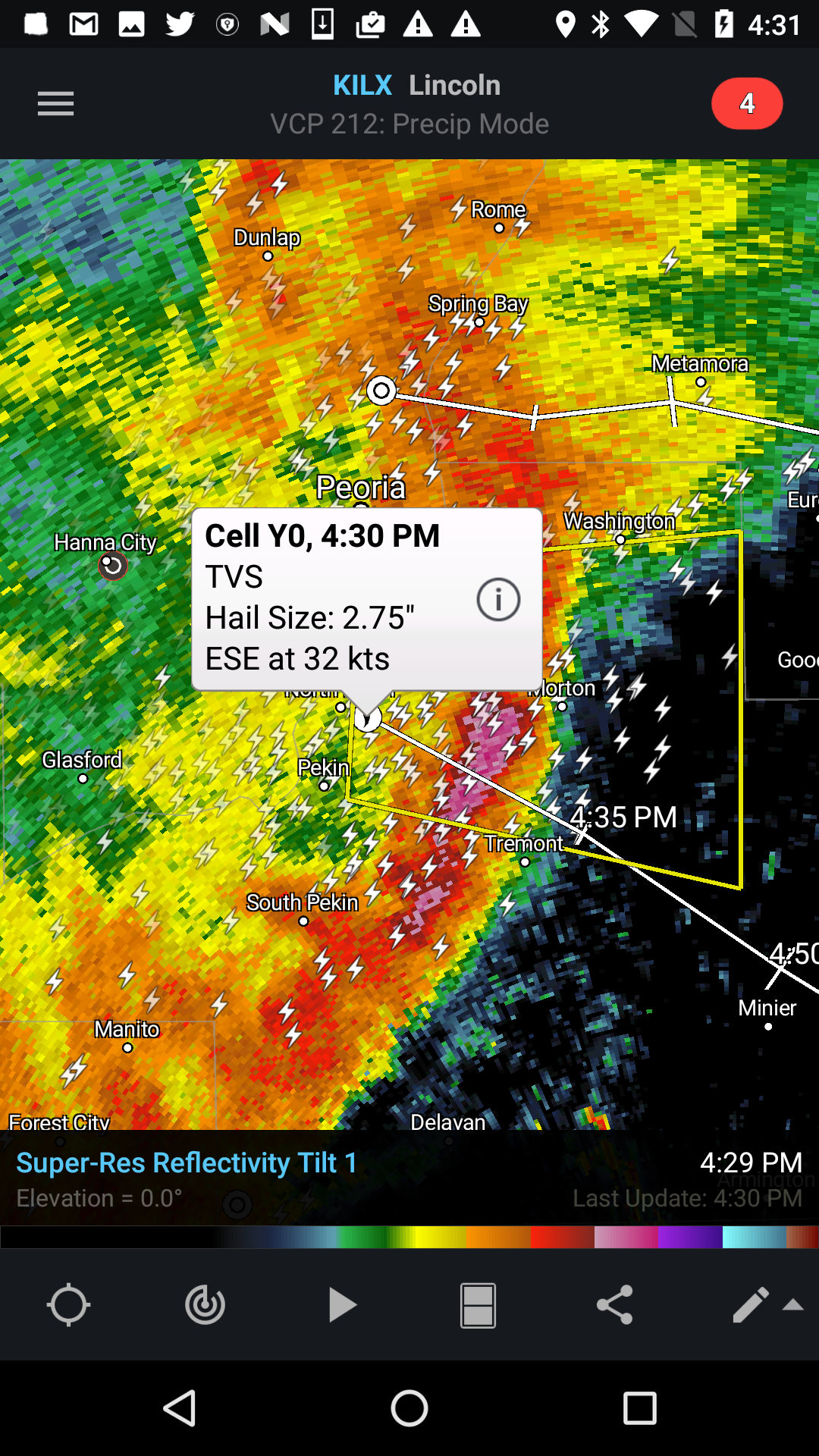