The most advanced weather radar display application for Mac, now even more powerful! 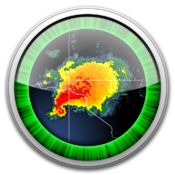 RadarScope for Mac is designed to retrieve and display weather radar products at lightning fast speed. New in V2.0 are a new distance measuring tool, user-defined locations, English and metric units for distance and velocity, enhanced AllisonHouse integration, and sharing capabilities including Twitter and Facebook.

RadarScope for Mac is available for purchase today at $29.99 in the Mac App Store. There is no cost to update for those with 1.3.2 currently installed. To download: http://imap.tv/rsmaymac

RadarScope is a specialized display utility for weather enthusiasts and meteorologists that allows mobile, Mac, and iPad users to view NEXRAD radar data and severe weather warnings. This first-class application can display the latest reflectivity, velocity, and other radar products from any NEXRAD radar site in the United States, Guam and Puerto Rico. Unlike other weather applications, RadarScope goes beyond displaying smoothed PNG or GIF images, offering instead, real Level 2 radar data rendered in its original radial format for a high level of detail. RadarScope products are available on the App Store, Mac App Store and Google Play. Follow us on Twitter & Facebook or on the web at RadarScope.tv