Why do radar gaps exist – how do we gather weather data?

The deployment of NEXRAD radars in the early 1990s was a major step forward in being able to sample precipitation across the Continental United States. However, there are still some limitations within the dense radar network. Due to the curvature of the earth, radar beams cannot see the entire atmosphere as the horizontal beam coming out from the radar increases with height as it moves further from its origin.

The radar is also limited in places with high terrain, as it is interrupted by mountain peaks. In addition to the curvature of the Earth, the radar beam weakens as it moves outward due to scattering and absorption, a process called radar beam attenuation. 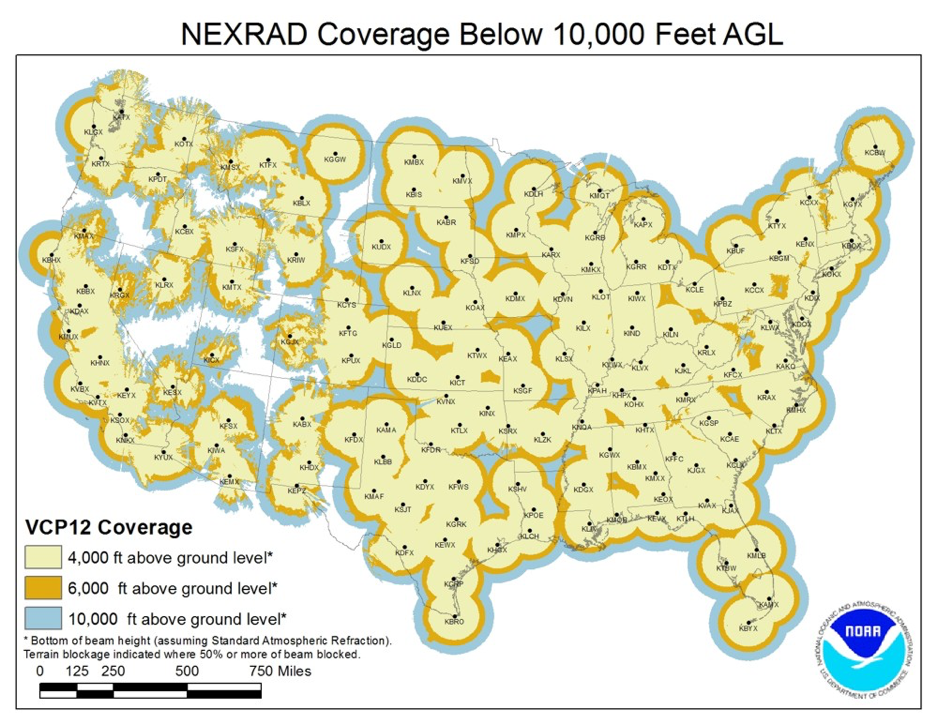 While there are currently 155 doppler radars across the United States, including territories, there are still numerous gaps in special coverage. The current radars have a range of 143 miles for highest resolution and can be extended to 248 miles in a long-range/lower resolution version.

Within RadarScope, the naming conventions for the shorter-range products start with “Super-Res”, while the longer-range versions either begin with “Base” or just the name of the radar product. If a RadarScope user finds themselves in an area where the Super-Res doesn’t capture everything, the idea is to switch to the Base products for more range at a lower resolution.

Major population centers are fortunate to have the highest of quality radar data available for forecasters, but in some spots in the Plains or Mississippi River Valley the radar beam is only sampling data from 6,000-10,000+ feet above the ground. Missing out on lower parts of a thunderstorm, for example, is critical in severe weather, as the rotation from a tornado is strongest and more crucial below 5,000 feet.

Radars are expensive to implement and maintain, yet a few universities around the country have recently installed a radar to help fill a gap where their university is located.

Through donations and grant money, Western Illinois University recently installed a weather radar to help fill the void in northeastern Missouri and western Illinois, one of the larger gaps in the current network.

Just down the road, the University of Missouri has its own radar as it also is in a radar gap. The Missouri data is available within the RadarScope App, providing valuable data for forecasters and the general public alike.

Outside of the mountains, the aforementioned radar gaps are locations where the data is questionable in its accuracy and utility. The further away from the radar, the more other means of observations become crucial and useful.

Forecasters use ground observations such as weather stations, trained weather spotter reports and mPING observations to connect the dots in between radar sites. They also use satellite data, which has recently been upgraded to provide a new scan every minute in most spots.

Reports are not enough when limitations exist, especially during severe weather cases and minutes matter where the situation is dynamic. Furthermore, radar gaps also hurt businesses that rely on hail data from thunderstorms to be proactive in their operations and deployment. If the radar measures hail 10,000 feet above the ground, there is no way of knowing if it reached the surface, except for ground observations. Those are quite spotty and incomplete.

The vast radar network across the United States is of the highest quality in the world, yet will always have its limitations. Businesses and stakeholders will continue to adapt, and other means of weather observations become more important in certain cases.

PREVIOUS POSTWhat Should I do When the Radar in My Backyard is Down?
NEXT POSTWhat is the RadarScope Shield and other commonly-used user terms?