An Open Letter from the RadarScope Creators Regarding Today’s Release

Today we’re excited to launch a new premium subscription tier to RadarScope. Our original RadarScope Pro subscription is now called RadarScope Pro Tier 1. Nothing in Tier 1 or the base app has changed. You still have access to all the features you had before, including super-resolution radar products, lightning data, and multi-pane display. 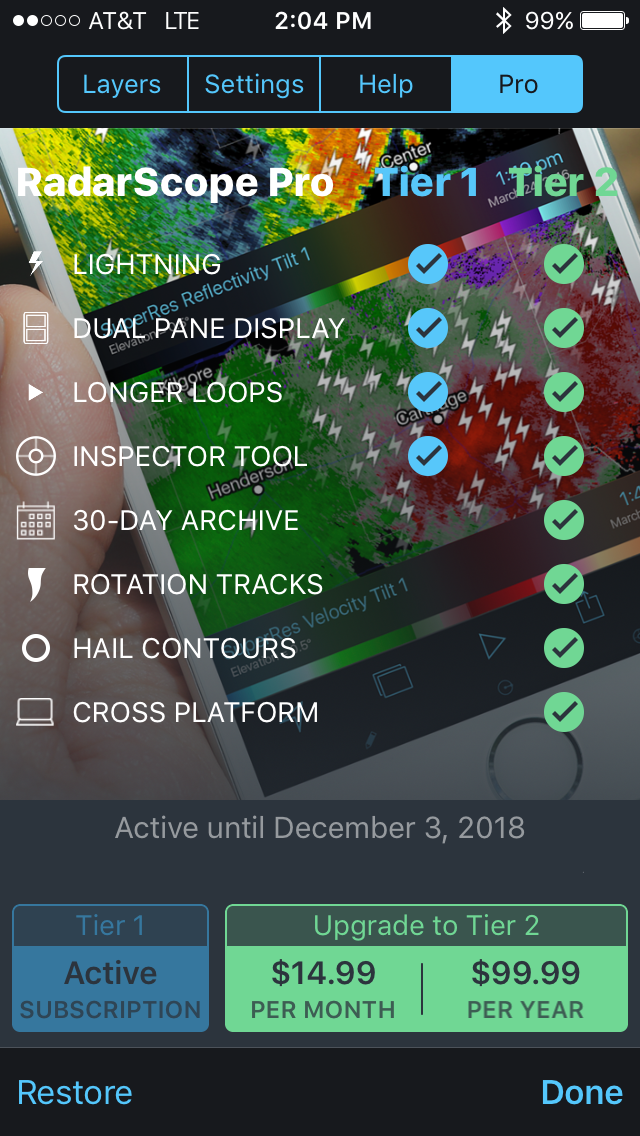 RadarScope has always been ideal for viewing radar products in real-time, but occasionally we need to look at past events. So we’re storing the entire suite of radar products, including super-res and dual-pol, at all four tilts in the cloud and keeping it assessable for up to 30 days. We also include mPING reports, and hail and shear contours. We hope it will be particularly useful for officials conducting storm surveys and for construction companies that help with repairs and cleanup after a storm. It will also give students and researchers an opportunity to review and study events in non-real-time. It’s perfect for anyone who needs or wants to learn more about weather patterns and how radar interprets them.

Pinpointing Impacts
Hail and tornadoes are two of the biggest threats from convective storms. Tier 2 includes contours of estimated hail size to help determine where hail has fallen and how large it was. It also includes contours of wind shear, which measures the difference in wind speed and direction over a relatively short distance—a phenomenon that is often indicative to, or a precursor of, tornadic activity. Hail and shear contours are based on radar data compiled over a 24-hour period. When viewed from the 30-day archive, they provide an indication of where hail and shear occurred during a given 24-hour period. When observed in real-time, they provide the same information for the current 24-hour period, updated about twice an hour. They’re a useful tool for determining the path of severe weather events over the course of a day.

Use It Here. Use It There. Use It Anywhere.
We’re frequently asked why RadarScope Pro subscriptions are limited to the platform on which they were purchased. The reason is simple: Apple and Google manage in-app purchases for us and sync them across your devices, and they don’t support cross-platform subscriptions. Tracking subscriptions across iOS, macOS, and Android would require us to build a system for registering purchases, create accounts, and manage them across platforms, all while syncing with Apple’s and Google’s payment processing and receipt validation systems. When we launched RadarScope Pro, we realized we could do all of that, but it would significantly increase the cost, even for the majority of customers who only use RadarScope on one platform. So, we decided to keep the price low for most people and let folks who needed cross-platform capability pay extra for it. It’s one of the reasons why RadarScope Pro Tier 1 is only $10 a year when so many other weather data plans cost ten times that or more.

The features in Tier 2 cost more to create and deliver. We felt customers would rightly expect to be able to use them on all of their devices without paying separately on each platform. So, Tier 2 includes the ability to create a RadarScope account that can sync to your other devices regardless of platform. As with all subscriptions, you can use Tier 2 on an unlimited number of devices of the same type (iOS, macOS, Android), provided they use the same App Store account. Your RadarScope account lets you also use Tier 2 features simultaneously on up to five devices of other types. With Tier 2 you can, for example, subscribe on your iPhone, register your account, and log in from your MacBook or your Android tablet to activate the features.

Sticker Shock
The price for Tier 2 is $100/year or $15/month. Yes, it’s significantly higher than either the RadarScope app or RadarScope Pro Tier 1. I’m sure long-time customers are wondering why and what this means for the future.

Tier 2 is priced higher because it has fixed costs that are independent of the number of customers who subscribe. Regardless the amount of users at his level, we have to cover the costs to move all that data to the cloud and store it there for a month. We also need to cover the additional support costs that come with managing cross-platform subscriptions outside of the App Store and Google Play ecosystem. We do our best to price our products by expected demand and in a way that ensures sustainable service. Tier 2 is no exception.

Does that mean we’re going to focus our efforts on Tier 2 and ignore the base app and Tier 1 going forward? Of course not! While we intend to utiliz Tier 2 to do things that simply weren’t possible at lower price points, we’re working on new features for all three levels and look forward to bringing them to customers as soon as they’re ready. Even if Tier 2 isn’t for you, rest assured our roadmap has good things in store for the future.